From Europe to Asia and Back 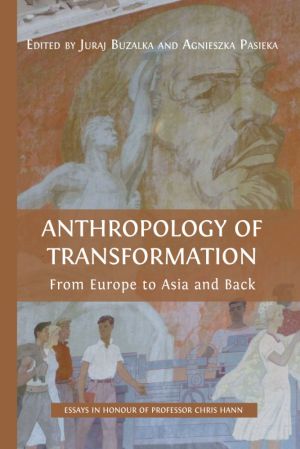 This collection of essays is the result of the joint efforts of colleagues and students of the leading social anthropology and post-socialism theorist, Professor Chris Hann. With the thirtieth anniversary of the collapse of the Berlin Wall in 2019 as their catalyst, the authors reflect upon Chris Hann's lifelong fieldwork in the discipline, spanning regions as diverse as East Central Europe, Turkey, and the Chinese north-west.

The collapse of the Berlin Wall naturally triggered a plethora of analysis and scholarly research. Sociocultural anthropology, with its focus on ethnographic study and on the gradual evolution of social relations, sharply contrasted with the emphasis on dramatic rupture brought about by the 1989 transition.

Continuing in this tradition, this volume, through micro-level analysis of societal transformation from the post-war years to the present day, provides an alternative perspective to the neoliberalist views often encountered in the scholarship on political and economic modernisation. The more nuanced analysis of social transformations proposed here is a particularly useful tool in the investigation of contemporary issues such as the COVID-19 pandemic, the refugee 'crisis', and the rise of right-wing populism in Eastern Europe and elsewhere.

Anthropology of Transformation will be of interest to researchers in the fields of socio-cultural anthropology, religion and economics. Moreover, the book's discussion of issues widely discussed beyond the field of academia such as neoliberalism and the welfare state, and populist and exclusionary politics, will appeal to non-specialist readers.

This open book is licensed under a Creative Commons License (CC BY). You can download Anthropology of Transformation ebook for free in PDF format (16.2 MB).

Chapter 1
Voiced versus Acted Trust: Managing Social Uncertainty and Marginalisation in Rural Southern Italy and Central Eastern Europe
Chapter 2
Property Relations and Ethnic Conflict in Post-war Croatia: Reflections on Conceptual Approaches and Research Findings
Chapter 3
The 'Post' in Perspective: Revisiting the Post-socialist Religious Question in Central Asia and Central and Eastern Europe
Chapter 4
"We Are Not Believers, We're Workers": The Synchrony of Work, Gender, and Religion in a Priestless Orthodox Community
Chapter 5
The Moral Economy of Consensus and Informality in Uzbekistan
Chapter 6
The Moral Dimension of (Un)Employment: Work and Fairness in an Eastern German Town
Chapter 7
Beyond Blue Eyes?: Xenophobia on the Eastern Margins of the European Union
Chapter 8
Post-Peasant Progressivism: On Liberal Tendencies in the Slovak Countryside
Chapter 9
Swimming against the Tide: Right-wing Populism, Post-socialism and Beyond
Chapter 10
Transoceania: Connecting the World beyond Eurasia

The Real Economy
This collection highlights a key metaphor in contemporary discourse about economy and society. The contributors explore how references to reality and the real economy are linked both to the utopias of collective well-being, supported by real monies and good economies, and the dystopias of financial bubbles and busts, in which people's own live...

25 Years of Transformations of Higher Education Systems in Post-Soviet Countries
This book is a result of the first ever study of the transformations of the higher education institutional landscape in fifteen former USSR countries after the dissolution of the Soviet Union in 1991. It explores how the single Soviet model that developed across the vast and diverse territory of the Soviet Union over several decades has evolved int...

Taming the Big Green Elephant
In this open publication it is shown, that sustainable low carbon development is a transformative process that constitutes the shifting from the initially chosen or taken pathway to another pathway as goals have been re-visited and revised to enable the system to adapt to changes. However, shifting entails transition costs that are accrued through ...

A Fair Share of Tax
This book takes a taxpayer's perspective to the relations taxation creates between people and their state. Larsen proposes that in order to understand tax compliance and cheating, we have to look beyond law, psychological experiments and surveys to include tax collectors and taxpayers' practices. The text explores the view of taxes seen a...

Agroecology Now!
This open book develops a framework for advancing agroecology transformations focusing on power, politics and governance. It explores the potential of agroecology as a sustainable and socially just alternative to today's dominant food regime. Agroecology is an ecological approach to farming that addresses climate change and biodiversity loss w...