Collaboration, Transparency, and Participation in Practice 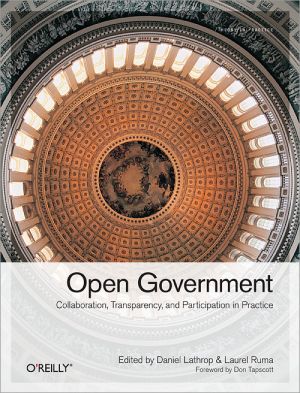 In a world where web services can make real-time data accessible to anyone, how can the government leverage this openness to improve its operations and increase citizen participation and awareness? Through a collection of essays and case studies, leading visionaries and practitioners both inside and outside of government share their ideas on how to achieve and direct this emerging world of online collaboration, transparency, and participation.

This open book is licensed under a Creative Commons License (CC BY-NC-ND). You can download Open Government ebook for free in PDF format (9.4 MB).

Wellbeing and Devolution
"In this book, Wallace elegantly shows how committed government intervention can improve wellbeing with rigour and impact. It's an essential read for anyone concerned with the future of the UK."Julia Unwin, CBE"As someone who commissioned one of the first attempts to learn from the devolved nations I am delighted to see this pub...

Swiss Public Administration
Swiss citizens approve of their government and the way democracy is practiced; they trust the authorities and are satisfied with the range of services Swiss governments provide. This is quite unusual when compared to other countries. This book provides insight into the organization and the functioning of the Swiss state. It claims that, beyond poli...

Your Post has been Removed
This open access monograph argues established democratic norms for freedom of expression should be implemented on the internet. Moderating policies of tech companies as Facebook, Twitter and Google have resulted in posts being removed on an industrial scale. While this moderation is often encouraged by governments - on the pretext that terrorism, b...

Peer Participation and Software
Firefox, a free Web browser developed by the Mozilla Foundation, is used by an estimated 270 million people worldwide. To maintain and improve the Firefox browser, Mozilla depends not only on its team of professional programmers and managers but also on a network of volunteer technologists and enthusiasts - free/libre and open source software (FLOS...