Toward Social-Scientific Literacy and Engineering Resilience 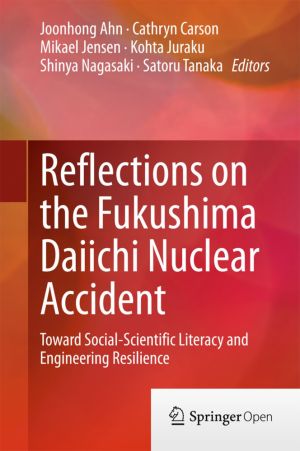 This book focuses on nuclear engineering education in the post-Fukushima era. It was edited by the organizers of the summer school held in August 2011 in University of California, Berkeley, as part of a collaborative program between the University of Tokyo and UC Berkeley. Motivated by the particular relevance and importance of social-scientific approaches to various crucial aspects of nuclear technology, special emphasis was placed on integrating nuclear science and engineering with social science. The book consists of the lectures given in 2011 summer school and additional chapters that cover developments in the past three years since the accident. It provides an arena for discussions to find and create a renewed platform for engineering practices, and thus nuclear engineering education, which are essential in the post-Fukushima era for nurturing nuclear engineers who need to be both technically competent and trusted in society.

This open book is licensed under a Creative Commons License (CC BY-NC). You can download Reflections on the Fukushima Daiichi Nuclear Accident ebook for free in PDF format (13.1 MB).

Low-Dose Radiation Effects on Animals and Ecosystems
This free book summarizes the latest scientific findings regarding the biological effects of the Fukushima Daiichi Nuclear Power Plant (FNPP) accident in 2011. Various cases of changes in animals and organisms have been reported since the FNPP accident. However, it is often unknown whether they are actually due to radiation, since the dose or dos...

Agricultural Implications of the Fukushima Nuclear Accident (III)
This book presents the findings from on-site research into radioactive cesium contamination in various agricultural systems affected by the Fukushima Daiichi Nuclear Power Plant accident in March 2011. This third volume in the series reports on studies undertaken at contaminated sites such as farmland, forests, and marine and freshwater environment...

Resilience: A New Paradigm of Nuclear Safety
This book summarizes presentations and discussions from the two-day international workshop held at UC Berkeley in March 2015, and derives questions to be addressed in multi-disciplinary research toward a new paradigm of nuclear safety. The consequences of the Fukushima Daiichi nuclear accident in March 2011 have fuelled the debate on nuclear safet...

Impacts of the Fukushima Nuclear Accident on Fish and Fishing Grounds
This book presents the results from the Japanese Fisheries Research Agency's 3-year intensive monitoring of radionuclides in a variety of fish, plankton, benthos, and their living environments after the Fukushima Daiichi Nuclear Power Plant (FNPP) accident in March 2011. The book reveals the dynamics of contamination processes in marine and fr...

Nuclear Back-end and Transmutation Technology for Waste Disposal
This book covers essential aspects of transmutation technologies, highlighting especially the advances in Japan. The accident at the Fukushima Daiichi Nuclear Power Plant (NPP) has caused us to focus attention on a large amount of spent nuclear fuels stored in NPPs. In addition, public anxiety regarding the treatment and disposal of high-level radi...