A Byte of Python 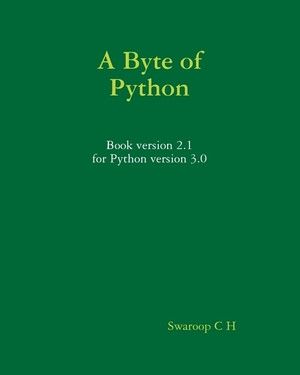 Python is one of those rare languages which can claim to be both simple and powerful. You will find yourself pleasantly surprised to see how easy it is to concentrate on the solution to the problem rather than the syntax and structure of the language you are programming in.

A Byte of Python is a free book on programming using the Python language. It serves as a tutorial or guide to the Python language for a beginner audience. If all you know about computers is how to save text files, then this is the book for you.

This book will teach you to use Python version 3. There will also be guidance for you to adapt to the older and more common Python version 2 in the book.

This open book is licensed under a Creative Commons License (CC BY-SA). You can download A Byte of Python ebook for free in PDF format (4.1 MB).

A Whirlwind Tour of Python
To tap into the power of Python's open data science stack - including NumPy, Pandas, Matplotlib, Scikit-Learn, and other tools - you first need to understand the syntax, semantics, and patterns of the Python language. This report provides a brief yet comprehensive introduction to Python for engineers, researchers, and data scientists who are a...

Fundamentals of Python Programming
Guido van Rossum created the Python programming language in the late 1980s. In contrast to other popular languages such as C, C++ , Java, and C#, Python strives to provide a simple but powerful syntax. Python is used for software development at companies and organizations such as Google, Yahoo, Facebook, CERN, Industrial Light and Magic, and NAS...

Snake Wrangling for Kids
Python for Kids is a lighthearted introduction to the Python language and to programming in general, complete with illustrations and kid-friendly examples. We begin with the basics of how to install Python and write simple commands. In bite-sized chapters, you'll discover the essentials of Python, including how to use Python's extensive s...

First Semester in Numerical Analysis with Python
The book is based on "First semester in Numerical Analysis with Julia". The contents of the original book are retained, while all the algorithms are implemented in Python (Version 3.8.0). Python is an open source (under OSI), interpreted, general-purpose programming language that has a large number of users around the world. Python is ran...