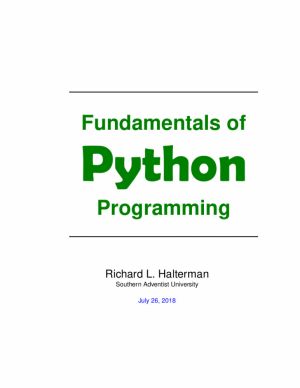 Guido van Rossum created the Python programming language in the late 1980s. In contrast to other popular languages such as C, C++ , Java, and C#, Python strives to provide a simple but powerful syntax.

Python is used for software development at companies and organizations such as Google, Yahoo, Facebook, CERN, Industrial Light and Magic, and NASA. Experienced programmers can accomplish great things with Python, but Python's beauty is that it is accessible to beginning programmers and allows them to tackle interesting problems more quickly than many other, more complex languages that have a steeper learning curve.

In late 2008, Python 3.0 was released. Commonly called Python 3, the current version of Python is incompatible with earlier versions of the language. Currently the Python world still is in transition between Python 2 and Python 3. Many existing published books cover Python 2, but more Python 3 resources now are becoming widely available. The code in this book is based on Python 3.

This book does not attempt to cover all the facets of the Python programming language. Experienced programmers should look elsewhere for books that cover Python in much more detail. The focus here is on introducing programming techniques and developing good habits. To that end, our approach avoids some of the more esoteric features of Python and concentrates on the programming basics that transfer directly to other imperative programming languages such as Java, C#, and C++ . We stick with the basics and explore more advanced features of Python only when necessary to handle the problem at hand.

This open book is licensed under a Creative Commons License (CC BY). You can download Fundamentals of Python Programming ebook for free in PDF format (13.1 MB).

Fundamentals of C++ Programming
Bjarne Stroustrup of AT&T Bell Labs created C++ in the mid 1980s. C++ is an extension of the programming language C, a product of AT&T Bell Labs from the early 1970s. C was developed to write the Unix operating system, and C is widely used for systems-level software and embedded systems development. C++ initially provided object-oriented...

A Whirlwind Tour of Python
To tap into the power of Python's open data science stack - including NumPy, Pandas, Matplotlib, Scikit-Learn, and other tools - you first need to understand the syntax, semantics, and patterns of the Python language. This report provides a brief yet comprehensive introduction to Python for engineers, researchers, and data scientists who are alread...

Fundamentals of Biomechanics
This book integrates the classic fields of mechanics - statics, dynamics, and strength of materials - using examples from biology and medicine. The book is excellent for teaching either undergraduates in biomedical engineering programs or health care professionals studying biomechanics at the graduate level. Extensively revised from a successful th...

A Byte of Python
Python is one of those rare languages which can claim to be both simple and powerful. You will find yourself pleasantly surprised to see how easy it is to concentrate on the solution to the problem rather than the syntax and structure of the language you are programming in. A Byte of Python is a free book on programming using the Python language...

Python Machine Learning Projects
As machine learning is increasingly leveraged to find patterns, conduct analysis, and make decisions - sometimes without final input from humans who may be impacted by these findings - it is crucial to invest in bringing more stakeholders into the fold. This book of Python projects in machine learning tries to do just that: to equip the developers ...