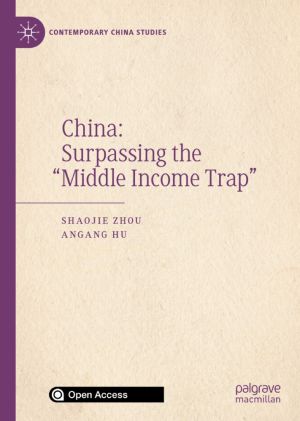 This open book explores one of the most fiercely debated issues in China: if and how China will surpass the middle income trap that has plagued many developing countries for years. This book gives readers a clear picture of China today and acts as a reference for other developing countries.

China is facing many setbacks and experiencing an economic slowdown in recent years due to some serious issues, and income inequality is one such issue deferring China's development potential by creating a middle income trap. This book thoroughly investigates both the unpromising factors and favorable conditions for China to overcome the trap. It illustrates that traps may be encountered at any stage of development and argues that political stability is the prerequisite to creating a favorable environment for economic development and addressing this "middle income trap".

Written by one of China's central planners, this book offers precious insights into the industrial policies that are transforming China and the world and will be of interest to China scholars, economists and political scientists.

This open book is licensed under a Creative Commons License (CC BY). You can download China: Surpassing the "Middle Income Trap" ebook for free in PDF format (3.5 MB).

Emerging States and Economies
This book asks why and how some of the developing countries have "emerged" under a set of similar global conditions, what led individual countries to choose the particular paths that led to their "emergence," and what challenges confront them. If we are to understand the nature of major risks and uncertainties in the world, we m...

Emerging States at Crossroads
This volume analyzes the economic, social, and political challenges that emerging states confront today. Notwithstanding the growing importance of the 'emerging states' in global affairs and governance, many problems requiring immediate solutions have emerged at home largely as a consequence of the rapid economic development and associated sociopol...

From War to Peace in the Balkans, the Middle East and Ukraine
This book focuses on the origins, consequences and aftermath of the 1995 and 1999 Western military interventions that led to the end of the most recent Balkan wars. Though challenging problems remain in Bosnia, Macedonia, Kosovo, and Serbia, the conflict prevention and state-building efforts thereafter were partly successful as countries of the reg...