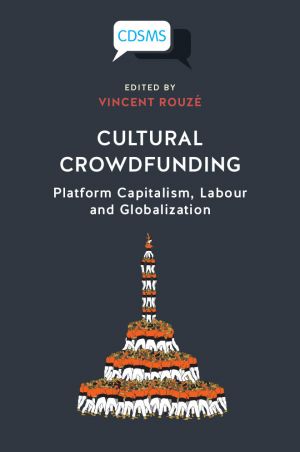 This new book analyses the strategies, usages and wider implications of crowdsourcing and crowdfunding platforms in the culture and communication industries that are reshaping economic, organizational and social logics. Platforms are the object of considerable hype with a growing global presence. Relying on individual contributions coordinated by social media to finance cultural production (and carry out promotional tasks) is a significant shift, especially when supported by morphing public policies, supposedly enhancing cultural diversity and accessibility.

The aim of this book is to propose a critical analysis of these phenomena by questioning what follows from decisions to outsource modes of creation and funding to consumers. Drawing on research carried out within the 'Collab' programme backed by the French National Research Agency, the book considers how platforms are used to organize cultural labour and/or to control usages, following a logic of suggestion rather than overt injunction. Four key areas are considered: the history of crowdfunding as a system; whose interests crowdfunding may serve; the implications for digital labour and lastly crowdfunding's interface with globalization and contemporary capitalism. The book concludes with an assessment of claims that crowdfunding can democratize culture.

This open book is licensed under a Creative Commons License (CC BY-NC-ND). You can download Cultural Crowdfunding ebook for free in PDF format (6.6 MB).

Cultural Heritage in a Changing World
The central purpose of this collection of essays is to make a creative addition to the debates surrounding the cultural heritage domain. In the 21st century the world faces epochal changes which affect every part of society, including the arenas in which cultural heritage is made, held, collected, curated, exhibited, or simply exists. The book is a...

History and Cultural Memory in Neo-Victorian Fiction
Arguing that neo-Victorian fiction enacts and celebrates cultural memory, this book uses memory discourse to position these novels as dynamic participants in the contemporary historical imaginary....

Companion to European Heritage Revivals
Are you organising an international heritage project? Turning a so-called 'heritage revival' into a meaningful experience for the general public can be a challenge to historians, archaeologists, museum conservators and tourism professionals alike. This Companion to European Heritage Revivals offers inspiration and new ideas to those who w...

Dissonant Heritages and Memories in Contemporary Europe
This book discusses political, economic, social, and humanitarian challenges that influence both how people deal with their past and how they build their identities in contemporary Europe. Ongoing debates on migration, on local, national, inter- and transnational levels, prove that it is a divisive issue with regards to understanding European integ...

Representations of Transnational Human Trafficking
This open access edited collection examines representations of human trafficking in media ranging from British and Serbian newspapers, British and Scandinavian crime novels, and a documentary series, and questions the extent to which these portrayals reflect the realities of trafficking. It tackles the problematic tendency to under-report particula...

New Horizons for Asian Museums and Museology
This book presents up-to-date information about museums and museology in present-day Asia, focusing on Japan, Mongolia, Myanmar, and Thailand.Asian countries today have developed or are developing their own museology and museums, which are not simple copies of European or North American models. This book provides readers with carefully chosen examp...