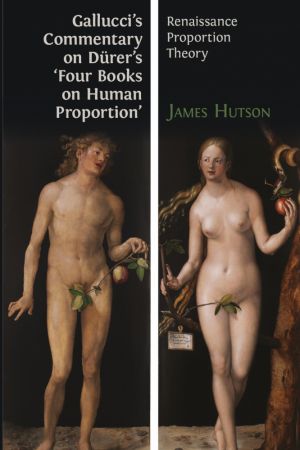 In 1591, Giovanni Paolo Gallucci published his Della simmetria dei corpi humani, an Italian translation of Albrecht Dürer's Four Books on Human Proportion. While Dürer's treatise had been translated earlier in the sixteenth-century into French and Latin, it was Gallucci's Italian translation that endured in popularity as the most cited version of the text in later Baroque treatises, covering topics that were seen as central to arts education, connoisseurship, patronage, and the wider appreciation of the studia humanitatis in general.

The text centres on the relationships between beauty and proportion, macrocosm and microcosm: relationships that were not only essential to the visual arts in the early modern era, but that cut across a range of disciplines - music, physiognomics and humoral readings, astronomy, astrology and cosmology, theology and philosophy, even mnemonics and poetry. In his version of the text, Gallucci expanded the educational potential of the treatise by adding a Preface, a Life of Dürer, and a Fifth Book providing a philosophical framework within which to interpret Dürer's previous sections.

This translation is the first to make these original contributions by Gallucci accessible to an English-speaking audience. Gallucci's contributions illuminate the significance of symmetry and proportion in the contemporary education of the early modern era, informing our understanding of the intellectual history of this period, and the development of art theory and criticism. This is a valuable resource to early modern scholars and students alike, especially those specialising in history of art, philosophy, history of science, and poetry.

This open book is licensed under a Creative Commons License (CC BY). You can download Gallucci's Commentary on Dürer's 'Four Books on Human Proportion' ebook for free in PDF format (13.3 MB).

Linux Appliance Design
Modern appliances are complex machines with processors, operating systems, and application software. While there are books that will tell you how to run Linux on embedded hardware, and books on how to build a Linux application, Linux Appliance Design is the first book to demonstrate how to merge the two and create a Linux appliance. You'll see for ...

Online Hate Speech in the European Union
and reports on research carried out as part of the European Union co-funded C.O.N.T.A.C.T. project which targeted hate speech and hate crime across a number of EU member states. It showcases the bearing that discourse analytic research can have on our understanding of this phenomenon that is a growing global cause for concern. Although 'hate sp...

The Onlife Manifesto
What is the impact of information and communication technologies (ICTs) on the human condition? In order to address this question, in 2012 the European Commission organized a research project entitled The Onlife Initiative: concept reengineering for rethinking societal concerns in the digital transition. This volume collects the work of the Onlife ...