Mergers and Alliances in Higher Education 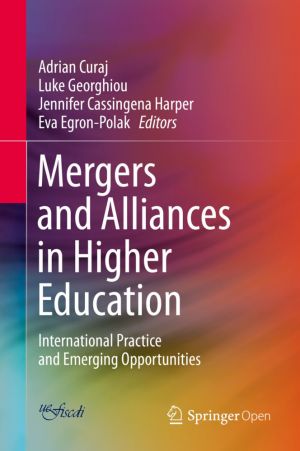 Higher education in Europe and beyond faces a series of major challenges. The economic crisis has accelerated expectations of an increased role in addressing economic and societal challenges while, at the same time, putting pressure on available finances. Broader trends such as shifting student demographics and expectations, globalisation and mobility and new ways of working with business have contributed to these increased pressures. In the light of these trends there have been moves, both from national or regional agencies and from individual institutions to respond by combining resources, either through collaborative arrangements or more fundamentally through mergers between two or more universities. This volume seeks to draw upon recent and past experiences of mergers and associations short of a merger and to approach the subject both from a systemic level and from the perspective of individual institutions. Inevitably the two levels are interlinked but broadly speaking this distinction is used to separate Part 1, dealing with perspectives at the level of a nation and national system, although often illustrated by examples which extend the range of cases (for countries such as France, Sweden, Romania, Wales, China, South Africa), and Part 2, which takes us down to individual case-studies analysed in depth (in countries such as France, UK, Romania, Spain, Australia). These experiences of course also show responses to wider forces and initiatives but allow a more detailed insight into the specific rationales and the implementation issues involved in effecting a university merger. Within the sections the general flow is from large to medium to small European countries and then to non-European.The chapters of this volume tell stories and make contributions in their own right. An introductory chapter seeks to guide the reader by pointing out from the start some recurrent themes and tensions. In seeking to identify the phenomenon of university mergers, their causes and their consequences, a series of dichotomies are discussed: alliance vs merger; external vs internal motivation; education vs research; short-term vs long-term outcomes and assessment; and motivation and implementation.

This open book is licensed under a Creative Commons License (CC BY-NC). You can download Mergers and Alliances in Higher Education ebook for free in PDF format (4.8 MB).

Indigenous Pathways, Transitions and Participation in Higher Education
This book brings together contributions by researchers, scholars, policy-makers, practitioners, professionals and citizens who have an interest in or experience of Indigenous pathways and transitions into higher education. University is not for everyone, but a university should be for everyone. To a certain extent, the choice not to participate in ...