Between Critical Reflections and Future Policies 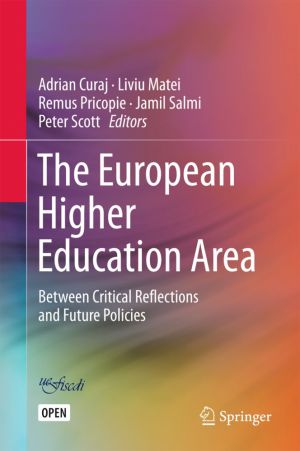 Bridging the gap between higher education research and policy making was always a challenge, but the recent calls for more evidence-based policies have opened a window of unprecedented opportunity for researchers to bring more contributions to shaping the future of the European Higher Education Area (EHEA). Encouraged by the success of the 2011 first edition, Romania and Armenia have organised a 2nd edition of the Future of Higher Education – Bologna Process Researchers' Conference (FOHE-BPRC) in November 2014, with the support of the Italian Presidency of the European Union and as part of the official EHEA agenda. Reuniting over 170 researchers from more than 30 countries, the event was a forum to debate the trends and challenges faced by higher education today and look at the future of European cooperation in higher education. The research volumes offer unique insights regarding the state of affairs of European higher education and research, as well as forward-looking policy proposals. More than 50 articles focus on essential themes in higher education: Internationalization of higher education; Financing and governance; Excellence and the diversification of missions; Teaching, learning and student engagement; Equity and the social dimension of higher education; Education, research and innovation; Quality assurance, The impacts of the Bologna Process on the EHEA and beyond and Evidence-based policies in higher education. "The Bologna process was launched at a time of great optimism about the future of the European project – to which, of course, the reform of higher education across the continent has made a major contribution. Today, for the present, that optimism has faded as economic troubles have accumulated in the Euro-zone, political tensions have been increased on issues such as immigration and armed conflict has broken out in Ukraine. There is clearly a risk that, against this troubled background, the Bologna process itself may falter. There are already signs that it has been downgraded in some countries with evidence of political withdrawal. All the more reason for the voice of higher education researchers to be heard. Since the first conference they have established themselves as powerful stakeholders in the development of the EHEA, who are helping to maintain the momentum of the Bologna process. Their pivotal role has been strengthened by the second Bucharest conference." Peter Scott, Institute of Education, London (General Rapporteur of the FOHE-BPRC first edition)

This open book is licensed under a Creative Commons License (CC BY-NC). You can download The European Higher Education Area ebook for free in PDF format (12.3 MB).

European Higher Education Area: Challenges for a New Decade
This open book highlights the major outcomes of the fourth edition of the Future of Higher Education - Bologna Process Researchers Conference (January 2020), which has already established itself as a landmark in the European higher education environment. The conference provides a unique forum for dialogue between researchers, experts and policy mak...