European Higher Education Area: The Impact of Past and Future Policies 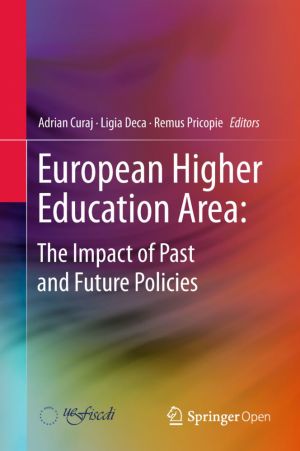 Higher education has thrived in Europe for the last three decades supported by the powerful policy narratives of the European construction and knowledge society. The two together called for better-integrated societies with higher economic competitiveness, superior employment, and social cohesion. Extraordinary developments in higher education during this time have also been made possible by what looked like a triumphal march of democracy.

This volume sketches a vivid picture of the state of higher education in Europe almost 30 years after the fall of the Berlin Wall. The emphasis is on the role of the Bologna Process, which is soon to turn 20 years old (a respectable age for any reform process). The authors document long-term transformations and recent cracks in the established higher education pathways and the broader policy narratives that supported them for the last 20-30 years.

New developments begin to affect the course of higher education. They come, once again, from outside rather than from within higher education. In some places in Europe, instead of democratic progress, we now witness authoritarianism, populism, or what is called with cynical self-flattery "illiberal democracy"; instead of Europe - Brexit; instead of policies for economic advancement and shared benefits, we witness attempts to institutionalize corruption at state level; an unprecedented mass movement of people raises unprecedented challenges on the continent. These are not tendencies emerging everywhere in Europe and not to the same degree every time. And yet, they contribute to define a shift, a new political atmosphere, with a larger spectrum of political regimes but with democratic recession.

Are we witnessing the advent of a new era? If so, that raises questions regarding the future of higher education, some of which are addressed in this volume. How will this new historical situation influence higher education? What can be done in higher education, building on what has been already achieved in these past years, including the Bologna Process itself, to benefit citizens, institutions, countries, and Europe as a whole?

This open book is licensed under a Creative Commons License (CC BY). You can download European Higher Education Area: The Impact of Past and Future Policies ebook for free in PDF format (14.6 MB).

European Higher Education Area: Challenges for a New Decade
This open book highlights the major outcomes of the fourth edition of the Future of Higher Education - Bologna Process Researchers Conference (January 2020), which has already established itself as a landmark in the European higher education environment. The conference provides a unique forum for dialogue between researchers, experts and policy mak...