Obsessed by a Dream

The Physicist Rolf Widerøe – a Giant in the History of Accelerators 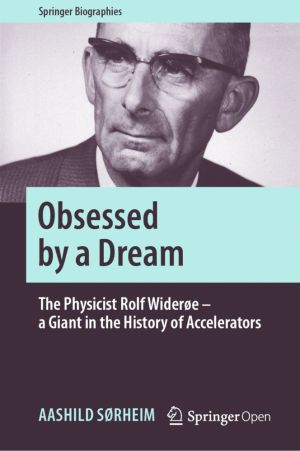 This Open Access biography chronicles the life and achievements of the Norwegian engineer and physicist Rolf Widerøe. Readers who meet him in the pages of this book will wonder why he isn't better known.
The first of Widerøe's many pioneering contributions in the field of accelerator physics was the betatron. He later went on to build the first radiation therapy machine, an advance that would eventually revolutionize cancer treatment. Hospitals worldwide installed his machine, and today's modern radiation treatment equipment is based on his inventions. Widerøe's story also includes a fair share of drama, particularly during World War II when both Germans and the Allies vied for his collaboration. Widerøe held leading positions in multinational industry groups and was one of the consultants for building the world's largest nuclear laboratory, CERN, in Switzerland. He gained over 200 patents, received several honorary doctorates and a number of international awards.The author, a professional writer and maker of TV documentaries, has gained access to hitherto restricted archives in several countries, which provided a wealth of new material and insights, in particular in relation to the war years. She tells here a gripping and illuminating story.

This open book is licensed under a Creative Commons License (CC BY-NC-ND). You can download Obsessed by a Dream ebook for free in PDF format (7.2 MB).

The dream pillow
Pirate, Tree and Bear are making it difficult to sleep. By day they are great friends, but when night comes, everything changes. No one can sleep. The Dream Pillow is a story about how to change bad dreams into good ones. A boy who is afraid because everything changes at night learns about dreaming and how to have good dreams....

The European Landing Obligation
This book provides a comprehensive examination of the European Landing Obligation policy from many relevant perspectives. It includes evaluations of its impacts at economical, socio-cultural, ecological and institutional levels. It also discusses the feasibility and benefits of several potential mitigation strategies. The book was timely published,...

Libelf by Example
This tutorial introduces libelf, a library for reading and writing object code in the Extensible Linking Format (ELF) file format. - Getting started with libelf: obtaining a handle to an ELF object, establishing a working ELF version, and handling errors reported by libelf. - How ELF data structures are laid out in-memory and on disk, the notions...

From Family to Philosophy
A cultural change in the Renaissance freed talented European writers to compose letters rivalling the finest that survived from ancient Rome. This book traces the lives and outlooks of distinguished Britons as revealed in their correspondence. The subjects range from the fierce satirist Jonathan Swift to the long-lived, all-observing Horace Walpole...