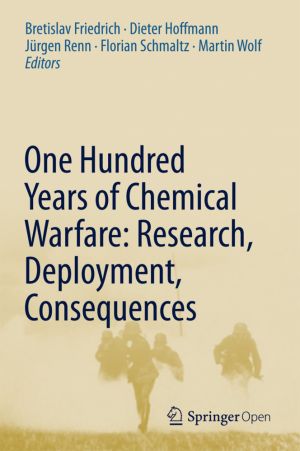 Carried by a long-awaited wind, the chlorine cloud passed within a few minutes through the British and French trenches, leaving behind at least 1,000 dead and 4,000 injured. This chemical attack, which amounted to the first use of a weapon of mass destruction, marks a turning point in world history. The preparation as well as the execution of the gas attack was orchestrated by Fritz Haber, the director of the Kaiser Wilhelm Institute for Physical Chemistry and Electrochemistry in Berlin-Dahlem. During World War I, Haber transformed his research institute into a center for the development of chemical weapons (and of the means of protection against them).Bretislav Friedrich and Martin Wolf (Fritz Haber Institute of the Max Planck Society, the successor institution of Haber's institute) together with Dieter Hoffmann, Jürgen Renn, and Florian Schmaltz (Max Planck Institute for the History of Science) organized an international symposium to commemorate the centenary of the infamous chemical attack. The symposium examined crucial facets of chemical warfare from the first research on and deployment of chemical weapons in WWI to the development and use of chemical warfare during the century hence. The focus was on scientific, ethical, legal, and political issues of chemical weapons research and deployment — including the issue of dual use — as well as the ongoing effort to control the possession of chemical weapons and to ultimately achieve their elimination.The volume consists of papers presented at the symposium and supplemented by additional articles that together cover key aspects of chemical warfare from 22 April 1915 until the summer of 2015.

This open book is licensed under a Creative Commons License (CC BY-NC). You can download One Hundred Years of Chemical Warfare: Research, Deployment, Consequences ebook for free in PDF format (9.1 MB).

One Hundred Years of Social Protection
While the rise of social protection in the global North has been widely researched, we know little about the history of social protection in the global South. This open book investigates the experiences of four middle-income countries - Brazil, India, China and South Africa - from 1920 to 2020, analysing if, when, and how these countries articulate...

Socioeconomic Inequality and Educational Outcomes
This open-access book focuses on trends in educational inequality using twenty years of grade 8 student data collected from 13 education systems by the IEA's Trends in Mathematics and Science Study (TIMSS) between 1995 and 2015. While the overall positive association between family socioeconomic status (SES) and student achievement is well document...

Cold Micro Metal Forming
This book contains the research report of the Collaborative Research Center "Micro Cold Forming" (SFB 747) of the University of Bremen, Germany. The topical research focus lies on new methods and processes for a mastered mass production of micro parts which are smaller than 1mm (by forming in batch size higher than one million). The targe...