Heidegger and the Sociology of Scientific Knowledge 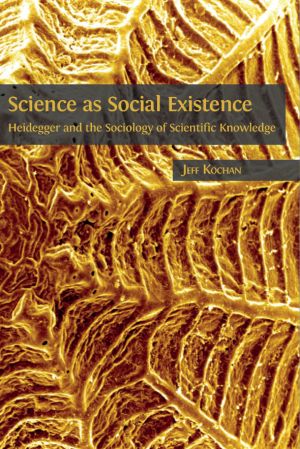 In this bold and original study, Jeff Kochan constructively combines the sociology of scientific knowledge (SSK) with Martin Heidegger's early existential conception of science. Kochan shows convincingly that these apparently quite different approaches to science are, in fact, largely compatible, even mutually reinforcing.

By combining Heidegger with SSK, Kochan argues, we can explicate, elaborate, and empirically ground Heidegger's philosophy of science in a way that makes it more accessible and useful for social scientists and historians of science. Likewise, incorporating Heideggerian phenomenology into SSK renders SKK a more robust and attractive methodology for use by scholars in the interdisciplinary field of Science and Technology Studies (STS). Kochan's ground-breaking reinterpretation of Heidegger also enables STS scholars to sustain a principled analytical focus on scientific subjectivity, without running afoul of the orthodox subject-object distinction they often reject.

Science as Social Existence is the first book of its kind, unfurling its argument through a range of topics relevant to contemporary STS research. These include the epistemology and metaphysics of scientific practice, as well as the methods of explanation appropriate to social scientific and historical studies of science. Science as Social Existence puts concentrated emphasis on the compatibility of Heidegger's existential conception of science with the historical sociology of scientific knowledge, pursuing this combination at both macro- and micro-historical levels.

Beautifully written and accessible, Science as Social Existence puts new and powerful tools into the hands of sociologists and historians of science, cultural theorists of science, Heidegger scholars, and pluralist philosophers of science.

This open book is licensed under a Creative Commons License (CC BY). You can download Science as Social Existence ebook for free in PDF format (4.2 MB).

Chapter 1
The Sociology of Scientific Knowledge, Phenomenology,and the Problem of the External World
Chapter 2
A Minimal Realism for Science Studies
Chapter 3
Finitude, Humility, and the Bloor-Latour Debate
Chapter 4
Things, Thinking, and the Social Foundations of Logic
Chapter 5
Mathēsis and the Emergence of Early-Modern Science
Chapter 6
Mathematics, Experiment, and the Ends of Scientific Practice
Chapter 7
Conclusion: Subjects, Systems, and Other Unfinished Business
Appendix

Methodological Investigations in Agent-Based Modelling
This book examines the methodological complications of using complexity science concepts within the social science domain. The opening chapters take the reader on a tour through the development of simulation methodologies in the fields of artificial life and population biology, then demonstrates the growing popularity and relevance of these method...

Pragmatic Philanthropy
This cutting edge text considers how Asian philanthropists and charitable organizations break with Western philanthropic traditions and examines the key traits and trends that make social investment in Asia unique. Based on 30 case studies of excellent social delivery organizations (SDOs) and social enterprises as well as interviews with ultra-high...

Qualitative Research in European Migration Studies
This book covers the main issues, challenges and techniques concerning the application of qualitative methodologies to the study of migration. It discusses theoretical, epistemological and empirical questions that must be considered before, during, and after undertaking qualitative research in migration studies. It also covers recent innovative dev...

The Science of Citizen Science
This open book discusses how the involvement of citizens into scientific endeavors is expected to contribute to solve the big challenges of our time, such as climate change and the loss of biodiversity, growing inequalities within and between societies, and the sustainability turn. The field of citizen science has been growing in recent decades. Ma...

Youth Transitions among Descendants of Turkish Immigrants in Amsterdam and Strasbourg:
This book maps the youth transitions of descendants of migrants from Turkey living in Amsterdam and Strasbourg, through a comparative mixed-methods research design. As such, it is of interest to discussions in youth sociology, social mobility and second-generation research. The book follows transition trajectories of the second-generation, from sch...