The Science of Citizen Science 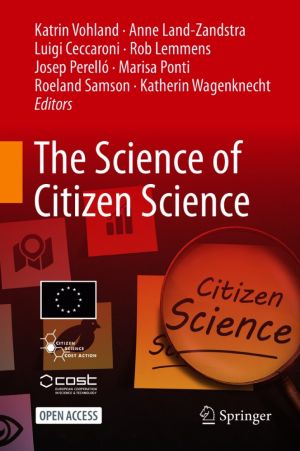 This open book discusses how the involvement of citizens into scientific endeavors is expected to contribute to solve the big challenges of our time, such as climate change and the loss of biodiversity, growing inequalities within and between societies, and the sustainability turn. The field of citizen science has been growing in recent decades. Many different stakeholders from scientists to citizens and from policy makers to environmental organisations have been involved in its practice. In addition, many scientists also study citizen science as a research approach and as a way for science and society to interact and collaborate. This book provides a representation of the practices as well as scientific and societal outcomes in different disciplines. It reflects the contribution of citizen science to societal development, education, or innovation and provides and overview of the field of actors as well as on tools and guidelines. It serves as an introduction for anyone who wants to get involved in and learn more about the science of citizen science.

This open book is licensed under a Creative Commons License (CC BY). You can download The Science of Citizen Science ebook for free in PDF format (8.9 MB).

Geographic Citizen Science Design
Little did Isaac Newton, Charles Darwin and other 'gentlemen scientists' know, when they were making their scientific discoveries, that some centuries later they would inspire a new field of scientific practice and innovation, called citizen science. The current growth and availability of citizen science projects and relevant applications...

Philosophy of Computer Science
This book looks at some of the central issues in the philosophy of computer science. It is not designed to answer all (or even any) of the philosophical questions that can be raised about the nature of computing, computers, and computer science. Rather, it is designed to "bring you up to speed" on a conversation about these issues - to gi...

The Economics of Big Science
The essays in this open access volume identify the key ingredients for success in capitalizing on public investments in scientific projects and the development of large-scale research infrastructures.Investment in science – whether in education and training or through public funding for developing new research tools and technologies – is a cruc...