The Biopsychosocial Model of Health and Disease 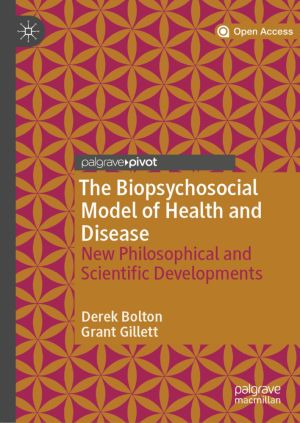 'This is an incredibly audacious book. Derek Bolton and Grant Gillett brilliantly succeed in providing the big picture that was lacking in the defense of the biopsychosocial model promoted by Engel 40 years ago.'
- Steeves Demazeux, Assistant Professor in philosophy, Bordeaux-Montaigne University, France

This book is a systematic update of the philosophical and scientific foundations of the biopsychosocial model of health, disease and healthcare. First proposed by George Engel 40 years ago, the Biopsychosocial Model is much cited in healthcare settings worldwide, but has been increasingly criticised for being vague, lacking in content, and in need of reworking in the light of recent developments. The book confronts the rapid changes to psychological science, neuroscience, healthcare, and philosophy that have occurred since the model was first proposed and addresses key issues such as the model's scientific basis, clinical utility, and philosophical coherence.
The authors conceptualise biology and the psychosocial as in the same ontological space, interlinked by systems of communication-based regulatory control which constitute a new kind of causation. These are distinguished from physical and chemical laws, most clearly because they can break down, thus providing the basis for difference between health and disease. This work offers an urgent update to the model's scientific and philosophical foundations, providing a new and coherent account of causal interactions between the biological, the psychological and social.

Derek Bolton is Professor of Philosophy and Psychopathology at the Institute of Psychiatry, Psychology and Neuroscience at King's College London, UK. He was awarded a double first in Moral Sciences and a PhD in Philosophy at the University of Cambridge. His subsequent professional career was in clinical psychology and he has published extensively in philosophy of psychiatry as well as basic and clinical health science.
Grant Gillett is Professor of Bioethics at the University of Otago, New Zealand. His professional career was in Neurosurgery, punctuated by a D. Phil. at Oxford University in philosophy of mind and meta-ethics. He has published extensively in neuroethics, philosophy of mind and language, philosophy of medicine (particularly psychiatry), and the philosophy of medical and social sciences.

This open book is licensed under a Creative Commons License (CC BY). You can download The Biopsychosocial Model of Health and Disease ebook for free in PDF format (1.9 MB).

The Handbook of Salutogenesis
This in-depth survey of salutogenesis shows the breadth and strengths of this innovative perspective on health promotion, health care, and wellness. Background and historical chapters trace the development of the salutogenic model of health, and flesh out the central concepts, most notably generalized resistance resources and the sense of coherence...

Creating Healthy and Sustainable Buildings
The open access book discusses human health and wellbeing within the context of built environments. It provides a comprehensive overview of relevant sources of literature and user complaints that clearly demonstrate the consequences of lack of attention to health in current building design and planning. Current designing of energy-efficient buildin...

Tobacco Control Policy in the Netherlands
Governments have known since the 1960s that smoking results in irreversible health damage. This book examines why governments have done so little to combat this when they have been aware of the problem and its solutions for decades. What are the strategies and decisions that make a difference, given that policy environments are often not conducive ...

Data and Text Processing for Health and Life Sciences
This book is a step-by-step introduction on how shell scripting can help solve many of the data processing tasks that Health and Life specialists face everyday with minimal software dependencies. The examples presented in the book show how simple command line tools can be used and combined to retrieve data and text from web resources, to filter and...

Equity, Equality and Diversity in the Nordic Model of Education
Does the Nordic model of education still stand by its original principles and safeguard education for all? This open volume is a carefully crafted collection of chapters that investigate the different aspects of equity, equality and diversity across the education systems in the Nordic countries. Based on data from various national and international...