Becoming Citizens in a Changing World 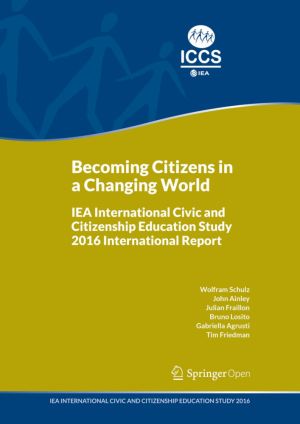 This book presents the results from the second cycle of the IEA International Civic and Citizenship Education Study (ICCS 2016). Using data from 24 countries in Asia, Europe and Latin America, the study investigates the ways in which young people are prepared to undertake their roles as citizens in a range of countries in the second decade of the 21st century. It also responds to the enduring and emerging challenges of educating young people in a world where contexts of democracy and civic participation continue to change. New developments of this kind include the increase in the use of social media by young people as a tool for civic engagement, growing concerns about global threats and sustainable development, as well as the role of schools in fostering peaceful ways of interaction between young people. Besides enabling the evaluation of a wide range of aspects of civic and citizenship education, including those related to recent developments in a number of countries, the inclusion of test and questionnaire material from the first cycle of the study in 2009 allows the results from ICCS 2016 to be used to examine changes in civic knowledge, attitudes and engagement over seven years.

This open book is licensed under a Creative Commons License (CC BY-NC). You can download Becoming Citizens in a Changing World ebook for free in PDF format (8.4 MB).

Teaching Tolerance in a Globalized World
This open access thematic report identifies factors and conditions that can help schools and education systems promote tolerance in a globalized world. The IEA's International Civic and Citizenship Study (ICCS) is a comparative research program designed to investigate the ways in which young people are prepared to undertake their roles as citi...

The Leap of Faith
This book examines the evolution of the relationship between taxpayers and their states in Sweden, Italy, the United Kingdom, the United States, and Romania, and asks why tax compliance is so much higher in some countries than others. The book shows that successful states have built strong administrative capacities, tax citizens fairly and equitabl...

Cultural Heritage in a Changing World
The central purpose of this collection of essays is to make a creative addition to the debates surrounding the cultural heritage domain. In the 21st century the world faces epochal changes which affect every part of society, including the arenas in which cultural heritage is made, held, collected, curated, exhibited, or simply exists. The book is a...