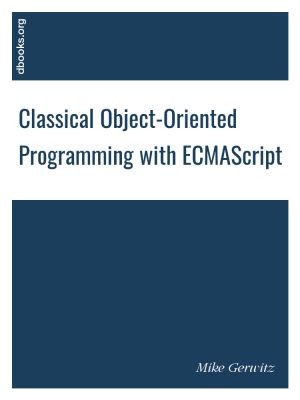 ECMAScript (more popularly known by the name "JavaScript") is the language of the web. In the decades past, it has been used to augment web pages with trivial features and obnoxious gimmicks. Today, the language is used to write full-featured web applications that rival modern desktop software in nearly every regard and has even expanded to create desktop and server software. With increased usage, there is a desire to apply more familiar development paradigms while continuing to take advantage of the language's incredibly flexible functional and prototypal models. Of all of the modern paradigms, one of the most influential and widely adopted is the Classical Object-Oriented paradigm, as represented in languages such as Java, C++, Python, Perl, PHP and others.

ECMAScript, as an object-oriented language, contains many features familiar to Classical OO developers. However, certain features remain elusive. This paper will detail the development of a classical object-oriented framework for ECMAScript - ease.js - which aims to address these issues by augmenting ECMAScript's prototype model to allow the creation of familiar class -like ob jects. This implementation enforces encapsulation and provides features that most Classical OO developers take for granted until the time that ECMAScript implements these features itself.

This open book is licensed under a GNU Free Documentation License (GNU FDL). You can download Classical Object-Oriented Programming with ECMAScript ebook for free in PDF format (0.6 MB).

Learning C#
C# is a general-purpose, modern and object-oriented programming language pronounced as "C sharp". It is an unofficial and free C# ebook created for educational purposes. All the content is extracted from Stack Overflow Documentation, which is written by many hardworking individuals at Stack Overflow....

Java Succinctly Part 1
Java is a high-level, cross-platform, object-oriented programming language that allows applications to be written once and run on a multitude of different devices. Java applications are ubiquitous, and the language is consistently ranked as one of the most popular and dominant in the world. Christopher Rose's Java Succinctly Part 1 describes the fo...

Learning Java
Java is a class-based, object-oriented programming language that is designed to have as few implementation dependencies as possible. It is an unofficial and free Java ebook created for educational purposes. All the content is extracted from Stack Overflow Documentation, which is written by many hardworking individuals at Stack Overflow....

Pro TBB
This book is a modern guide for all C++ programmers to learn Threading Building Blocks (TBB). Written by TBB and parallel programming experts, this book reflects their collective decades of experience in developing and teaching parallel programming with TBB, offering their insights in an approachable manner. Throughout the book the authors present ...