The Case of Rotterdam 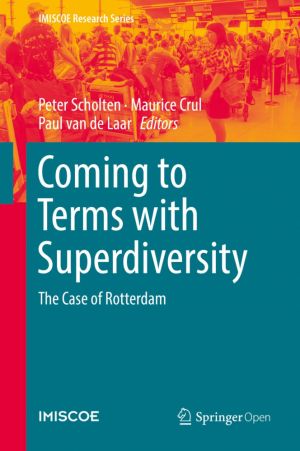 This book discusses Rotterdam as clear example of a superdiverse city that is only reluctantly coming to terms with this new reality. Rotterdam, as is true for many post-industrial cities, has seen a considerable backlash against migration and diversity: the populist party Leefbaar Rotterdam of the late Pim Fortuyn is already for many years the largest party in the city. At the same time Rotterdam has become a majority minority city where the people of Dutch descent have become a numerical minority themselves. The book explores how Rotterdam is coming to terms with superdiversity, by an analysis of its migration history of the city, the composition of the migrant population and the Dutch working class population, local politics and by a comparison with Amsterdam and other cities. As such it contributes to a better understanding not just of how and why super-diverse cities emerge but also how and why the reaction to a super-diverse reality can be so different.

By focusing on different aspects of superdiversity, coming from different angles and various disciplinary backgrounds, this book will be of interest to students and scholars in migration, policy sciences, urban studies and urban sociology, as well as policymakers and the broader public.

This open book is licensed under a Creative Commons License (CC BY). You can download Coming to Terms with Superdiversity ebook for free in PDF format (4.1 MB).

Guide to NoSQL with Azure Cosmos DB
Cosmos DB is a NoSQL database service included in Azure that is continuously adding new features and has quickly become one of the most innovative services found in Azure, targeting mission-critical applications at a global scale. This book starts off by showing you the main features of Cosmos DB, their supported NoSQL data models and the foundatio...

Evolve the Monolith to Microservices with Java and Node
Microservices is an architectural style in which large, complex software applications are composed of one or more smaller services. Each of these microservices focuses on completing one task that represents a small business capability. These microservices can be developed in any programming language. This book shows how to break out a traditiona...

Text Mining with R
Much of the data available today is unstructured and text-heavy, making it challenging for analysts to apply their usual data wrangling and visualization tools. With this practical book, you'll explore text-mining techniques with tidytext, a package that authors Julia Silge and David Robinson developed using the tidy principles behind R packag...

Introduction to Data Science
The demand for skilled data science practitioners in industry, academia, and government is rapidly growing. This book introduces concepts and skills that can help you tackle real-world data analysis challenges. It covers concepts from probability, statistical inference, linear regression and machine learning. It also helps you develop skills such a...

TouchDevelop
Mobile devices such as smartphones and tablets are set to become the main computers that virtually all people will own and carry with them at all times. And yet,mobile devices are not yet used for all computing tasks. A project at Microsoft Research was created to answer a simple question: "It is possible to create interesting apps directly on...