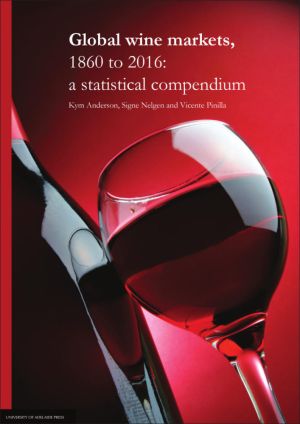 Until recently, most grape-based wine was consumed close to where it was produced, and mostly that was in Europe. Despite the huge growth in inter-continental trade, investment and migration during the first globalization wave that came to a halt with World War I, it was not until the 1990s that the export share of global wine production rose above the 5-12% range in which it had fluctuated for centuries. The latest globalization wave has changed that forever. Now more than two-fifths of all wine consumed globally is produced in another country. Europe's dominance of global wine trade has been diminished by the surge of exports from the Southern Hemisphere and the United States. New consumers have come onto the scene as incomes have grown, eating and drinking habits have changed, and tastes have broadened. Asia has emerged as an important consuming region, and in China that has stimulated the development of local production that, in volume terms, already rivals that of Argentina, Australia, Chile and South Africa.

This latest edition of global wine statistics not only updates data to 2016 but also adds another century of data. The motivation to assemble those historical data was to enable comparisons between the current and the previous globalization waves. This unique database reveals that, even though Europe's vineyards were devastated by vine diseases and the pest phylloxera from the 1860s, most 'New World' countries remained net importers of wine until late in the nineteenth century. Some of the world's leading wine economists and historians have contributed to and drawn on this database to examine the development of national wine market developments before, during and in between the two waves of globalization. Their initial analyses cover all key wine-producing and -consuming countries using a common methodology to explain long-term trends and cycles in national wine production, consumption, and trade.

This open book is licensed under a Creative Commons License (CC BY). You can download Global Wine Markets, 1860 to 2016 ebook for free in PDF format (17.4 MB).

Equitable Research Partnerships
This book offers insights into the development of the ground-breaking Global Code of Conduct for Research in Resource-Poor Settings (GCC) and the San Code of Research Ethics. Using a new, intuitive moral framework predicated on fairness, respect, care and honesty, both codes target ethics dumping - the export of unethical research practices from a ...

World Class Universities
This open book focuses on the dimensions of the discourse of 'The World Class University', its alleged characteristics, and its policy expressions. It offers a broad overview of the historical background and current trajectory of the world-class-university construct. It also deepens the theoretical discussion, and points a way forward out of presen...

Remote Sensing of Plant Biodiversity
This open volume aims to methodologically improve our understanding of biodiversity by linking disciplines that incorporate remote sensing, and uniting data and perspectives in the fields of biology, landscape ecology, and geography. The book provides a framework for how biodiversity can be detected and evaluated - focusing particularly on plants -...