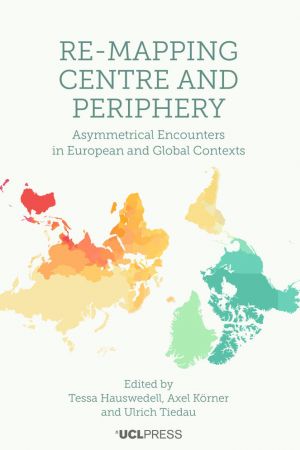 Historians often assume a one-directional transmission of knowledge and ideas, leading to the establishment of spatial hierarchies defined as centres and peripheries. In recent decades, transnational and global history have contributed to a more inclusive understanding of intellectual and cultural exchanges that profoundly challenged the ways in which we draw our mental maps.

Covering the early modern and modern periods, Re-Mapping Centre and Periphery investigates the asymmetrical and multi-directional structure of such encounters within Europe as well as in a global context. Exploring subjects from the shores of the Russian Empire to nation-making in Latin America, the international team of contributors demonstrates how, as products of human agency, centre and periphery are conditioned by mutual dependencies; rather than representing absolute categories of analysis, they are subjective constructions determined by a constantly changing discursive context.

Through its analysis, the volume develops and implements a conceptual framework for remapping centres and peripheries, based on conceptual history and discourse history. As such, it will appeal to a wide variety of historians, including transnational, cultural and intellectual, and historians of early modern and modern periods.

This open book is licensed under a Creative Commons License (CC BY). You can download Re-Mapping Centre and Periphery ebook for free in PDF format (13.4 MB).

Chapter 1
Space and Asymmetric Difference in Historical Perspective: An Introduction
Chapter 2
Rethinking Centre and Periphery in Historical Analysis: Land-based Modernization as an Alternative Model from the Peripheries
Chapter 3
Europe and the Concept of Margin
Chapter 4
After Identity: Mentalities, European Asymmetries and the Digital Turn
Chapter 5
From the Baltic to the Pacific: Trade, Shipping and Exploration on the Shores of the Russian Empire
Chapter 6
Republics of Knowledge: Interpreting the World from Latin America
Chapter 7
From Manchester and Lille to the World: Nineteenth Century Provincial Cities Conceptualize Their Place in the Global Order
Chapter 8
Turning Constitutional History Upside Down: The 1820s Revolutions in the Mediterranean
Chapter 9
The Cosmopolitan Morphology of the National Discourse: Italy as a European Centre of Intellectual Modernity
Chapter 10
'The Greatest City the World has ever seen': London's Imperial and European Contexts in British public debates, 1870-1900
Chapter 11
Mediating Hybrids: Consumption and Transnationality

Water Resource Systems Planning and Management
This revised, updated textbook presents a systems approach to the planning, management, and operation of water resources infrastructure in the environment. Previously published in 2005 by UNESCO and Deltares (Delft Hydraulics at the time), this new edition, written again with contributions from Jery R. Stedinger, Jozef P. M. Dijkman, and Monique T...

Global Perspectives on Recognising Non-formal and Informal Learning
This book deals with the relevance of recognition and validation of non-formal and informal learning in education and training, the workplace and society. In an increasing number of countries, it is at the top of the policy and research agenda ranking among the possible ways to redress the glaring lack of relevant academic and vocational qualificat...

Research on Teaching and Learning Probability
This book summarizes the vast amount of research related to teaching and learning probability that has been conducted for more than 50 years in a variety of disciplines. It begins with a synthesis of the most important probability interpretations throughout history: intuitive, classical, frequentist, subjective, logical propensity and axiomatic vie...

Science and Technology Governance and Ethics
This book analyzes the possibilities for effective global governance of science in Europe, India and China. Authors from the three regions join forces to explore how ethical concerns over new technologies can be incorporated into global science and technology policies. The first chapter introduces the topic, offering a global perspective on embeddi...

Ester Boserup's Legacy on Sustainability
Arising from a scientific conference marking the 100th anniversary of her birth, this book honors the life and work of the social scientist and diplomat Ester Boserup, who blazed new trails in her interdisciplinary approach to development and sustainability. The contents are organized in three sections reflecting important focal points of Boserup&...