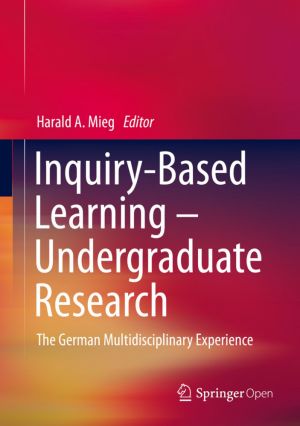 This book provides a systematic overview of experiences with Inquiry-Based Learning (IBL) and undergraduate research (UR) in German universities, covering both research universities (Universitäten) and universities of applied sciences (Fachhochschulen). Divided into three parts, the book starts with the principles and common practices of IBL/UR at all universities. Part Two discusses the implementation of IBL/UR for twenty-one individual disciplines, ranging from architecture to theology. Part Three discusses the potential of IBL/UR in relation to several topics including diversity, digitalisation, different forms of universities, and the national job market. The book summarises the project of the German network of UR, comprising approximately 50 universities, and results of a national initiative called Qualitätspakt Lehre which is intended to improve teaching at German universities.

Today IBL and UR are essential parts of high-impact education strategies for universities around the world. In his university reform plans of the early 19th century, Wilhelm von Humboldt introduced Inquiry-Based Teaching and Learning as the core principle of the modern research university in Germany, as well as worldwide. IBL was re-discovered in the German university reform initiatives of the 1960s. Since then, IBL has been applied in teachers' education in German universities. The book presents IBL/UR experience as complementary to what is usually presented in English-speaking academia. In Germany, IBL/UR is applied broadly throughout the social sciences and planning, but not in the core sciences, whereas in the US undergraduate research is common in the sciences but less so in the social sciences. Moreover, in Germany, IBL/UR is often linked to applied and community-oriented research — something that is just emerging in the US.

This open book is licensed under a Creative Commons License (CC BY-NC-ND). You can download Inquiry-Based Learning - Undergraduate Research ebook for free in PDF format (7.2 MB).

Vocational Teacher Education in Central Asia
This book is open access under a CC-BY license. This open access volume presents papers on vocational education, project-based learning and science didactic approaches, illustrating with sample cases, and with a special focus on Central Asian states. Thematically embedded in the area of Technical Vocational Education and Training (TVET), the book e...

Lines of Inquiry in Mathematical Modelling Research in Education
This book is based on selected presentations from Topic Study Group 21: Mathematical Applications and Modelling in the Teaching and Learning of Mathematics at the 13th International Congress on Mathematical Education (ICME 13), held in Hamburg, Germany on July 24–31, 2016. It contributes to the theory, research and teaching practice concerning th...

The Troika of Adult Learners, Lifelong Learning, and Mathematics
This book presents a synopsis of six emerging themes in adult mathematics/numeracy and a critical discussion of recent developments in terms of policies, provisions, and the emerging challenges, paradoxes and tensions. It also offers an extensive review of the literature adult mathematics education. Why do adults want to learn mathematics? Did they...

The Models of Engaged Learning and Teaching
This book provides a practical philosophy for promoting students' sophisticated thinking from Early Childhood to PhD in ways that explicitly interconnect across the years of education. It will help teachers, academics and the broader learning and teaching community to understand and implement these connections by introducing a conceptual frame...

Game Based and Adaptive Learning Strategies
This book is designed to accompany a graduate-level instructional design course: Game-Based and Adaptive Learning, but could also be used for undergraduate teacher education or instructional design courses. The original texts and material for this book came from the development of a course for Brandeis University as part of their MS in Learner E...

Global Perspectives on Recognising Non-formal and Informal Learning
This book deals with the relevance of recognition and validation of non-formal and informal learning in education and training, the workplace and society. In an increasing number of countries, it is at the top of the policy and research agenda ranking among the possible ways to redress the glaring lack of relevant academic and vocational qualificat...