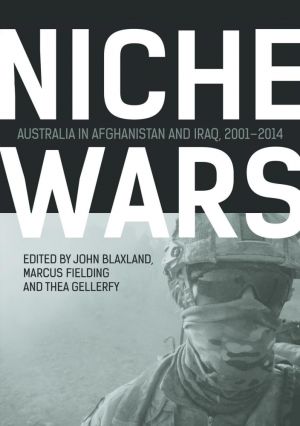 Australia invoked the ANZUS Alliance following the Al Qaeda attacks in the United States on 11 September 2001. But unlike the calls to arms at the onset of the world wars, Australia decided to make only carefully calibrated force contributions in support of the US-led coalition campaigns in Afghanistan and Iraq. Why is this so?

Niche Wars examines Australia's experience on military operations in Afghanistan and Iraq from 2001 to 2014. These operations saw over 40 Australian soldiers killed and hundreds wounded. But the toll since has been greater. For Afghanistan and Iraq the costs are hard to measure. Why were these forces deployed? What role did Australia play in shaping the strategy and determining the outcome? How effective were they? Why is so little known about Australia's involvement in these campaigns? What lessons can be learned from this experience?

Niche Wars commences with a scene-setting overview of Australia's military involvement in the Middle East over more than a century. It then draws on unique insights from many angles, across a spectrum of men and women, ranging from key Australian decision makers, practitioners and observers. The book includes a wide range of perspectives in chapters written by federal government ministers, departmental secretaries, service commanders, task force commanders, sailors, soldiers, airmen and women, international aid workers, diplomats, police, journalists, coalition observers and academics.

Niche Wars makes for compelling reading but also stands as a reference work on how and why Australia became entangled in these conflicts that had devastating consequences. If lessons can be learned from history about how Australia uses its military forces, this book is where to find them.

This open book is licensed under a Creative Commons License (CC BY-NC-ND). You can download Niche Wars ebook for free in PDF format (22.5 MB).

From War to Peace in the Balkans, the Middle East and Ukraine
This book focuses on the origins, consequences and aftermath of the 1995 and 1999 Western military interventions that led to the end of the most recent Balkan wars. Though challenging problems remain in Bosnia, Macedonia, Kosovo, and Serbia, the conflict prevention and state-building efforts thereafter were partly successful as countries of the reg...

Lewis Fry Richardson: His Intellectual Legacy and Influence in the Social Sciences
This is an open access book. Lewis F Richardson (1981-1953), a physicist by training, was a pioneer in meteorology and peace research and remains a towering presence in both fields. This edited volume reviews his work and assesses its influence in the social sciences, notably his work on arms races and their consequences, mathematical models, the s...

Innovation Capacity and the City
This free book represents one of the key milestones of DESIGNSCAPES, an H2020 CSA (Coordination and Support Action) research project funded by the European Commission under the Call "User-driven innovation: value creation through design-enabled innovation". The book demonstrates that adopting design allows us to embed innovation within th...

R.J. Rummel: An Assessment of His Many Contributions
The book provides a critical and constructive assessment of the many contributions to social science and politics made by Professor R. J. Rummel. Rummel was a prolific writer and an important teacher and mentor to a number of people who in turn have made their mark on the profession. His work has always been controversial. But after the end of the ...