Lewis Fry Richardson: His Intellectual Legacy and Influence in the Social Sciences 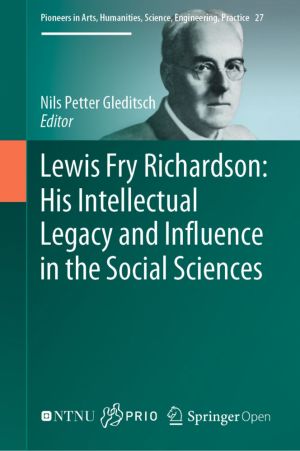 This is an open access book. Lewis F Richardson (1981-1953), a physicist by training, was a pioneer in meteorology and peace research and remains a towering presence in both fields. This edited volume reviews his work and assesses its influence in the social sciences, notably his work on arms races and their consequences, mathematical models, the size distribution of wars, and geographical features of conflict. It contains brief bibliographies of his main publications and of articles and books written about Richardson and his work and discusses his continuing influence in peace research and international relations as well as his attitude to the ethical responsibilities of a scientist. It will be of interest to a wide range of scholars. This book includes 11 chapters written by Nils Petter Gleditsch, Dina A Zinnes, Ron Smith, Paul F Diehl, Kelly Kadera, Mark Crescenzi, Michael D Ward, Kristian Skrede Gleditsch, Nils B Weidmann, Jürgen Scheffran, Niall MacKay, Aaron Clauset, Michael Spagat and Stijn van Weezel.
Lewis F Richardson occupied an important position in two academic fields as different as meteorology and peace research, with academic prizes awarded in both disciplines.
In peace research, he pioneered the use of mathematical models and the meticulous compilation of databases for empirical research.
As a quaker and pacifist, he refused to work in preparations for war, paid a heavy prize in terms of his career, and (at least in the social sciences) was fully recognized as a pioneering scholar only posthumously with the publication of two major books.
Lewis Fry Richardson is one of the 20th century's greatest but least appreciated thinkers—a creative physicist, psychologist, meteorologist, applied mathematician, historian, pacifist, statistician, and witty stylist. If you've heard of weather prediction, chaos, fractals, cliometrics, peace science, big data, thick tails, or black swans, then you have benefited from Richardson's prescience in bringing unruly phenomena into the ambit of scientific understanding. Richardson's ideas continue to be relevant today, and this collection is a superb retrospective on this brilliant and lovable man.
Steven Pinker, Johnstone Professor, Harvard University, and the author of The Better Angels of Our Nature and Enlightenment Now

This open book is licensed under a Creative Commons License (CC BY). You can download Lewis Fry Richardson: His Intellectual Legacy and Influence in the Social Sciences ebook for free in PDF format (3.5 MB).

Methodological Investigations in Agent-Based Modelling
This book examines the methodological complications of using complexity science concepts within the social science domain. The opening chapters take the reader on a tour through the development of simulation methodologies in the fields of artificial life and population biology, then demonstrates the growing popularity and relevance of these method...

Research Ethics for Students in the Social Sciences
This open access book offers a practical guide into research ethics for undergraduate students in the social sciences. A step-by-step approach of the most viable issues, in-depth discussions of case histories and a variety of didactical tools will aid the student to grasp the issues at hand and help him or her develop strategies to deal with them.T...