Russia's Turn to the East 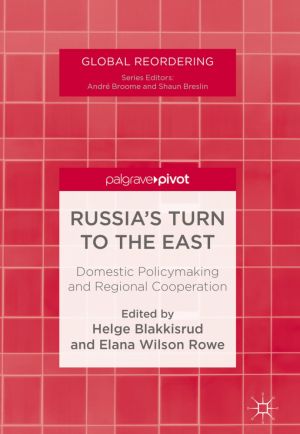 This book explores if and how Russian policies towards the Far East region of the country – and East Asia more broadly – have changed since the onset of the Ukraine crisis and Russia's annexation of Crimea. Following the 2014 annexation and the subsequent enactment of a sanctions regime against the country, the Kremlin has emphasized the eastern vector in its external relations. But to what extent has Russia's 'pivot to the East' intensified or changed in nature – domestically and internationally – since the onset of the current crisis in relations with the West? Rather than taking the declared 'pivot' as a fact and exploring the consequences of it, the contributors to this volume explore whether a pivot has indeed happened or if what we see today is the continuation of longer-duration trends, concerns and ambitions.
Helge Blakkisrud is Head of the Research Group on Russia, Eurasia and the Arctic at the Norwegian Institute of International Affairs (NUPI), Norway. His research interests include Russian regional politics, centre–region relations and federalism, as well as nation-building, nationalism and national identity in Russia and Eurasia. His most recent books are The Governors' Last Stand: Federal Bargaining in Russia's Transition to Appointed Regional Heads, 2005–2009 (2015) and The New Russian Nationalism: Imperialism, Ethnicity and Authoritarianism, 2000–2015 (co-edited with Pål Kolstø, 2016).Elana Wilson Rowe is Head of the Research Group on Emerging Powers and International Development at the Norwegian Institute of International Affairs (NUPI), Norway; and Adjunct Professor at Nord University, Norway. Her present research interests include Russian foreign policy, particularly in the areas of energy and climate change, and Arctic politics. She is the author of Russian Climate Politics (2013), editor of Russia and the North (2009) and co-editor of The Multilateral Dimension in Russian Foreign Policy (with Stina Torjesen, 2009) and Russia's Encounter with Globalization (with Julie Wilhelmsen, 2011).

This open book is licensed under a Creative Commons License (CC BY). You can download Russia's Turn to the East ebook for free in PDF format (3.4 MB).

Sailing from Polis to Empire
What can the architecture of ancient ships tell us about their capacity to carry cargo or to navigate certain trade routes? How do such insights inform our knowledge of the ancient economies that depended on maritime trade across the Mediterranean? These and similar questions lie behind Sailing from Polis to Empire, a fascinating insight into th...

Ukrainian Migration to the European Union
This book brings together research findings from a variety of disciplines in this integrated study of the migration of Ukrainian nationals to the EU. It contextualizes and historicizes this migration against the background of the series of crises experienced by Ukraine and the wider region over the last thirty or so years, from the dissolution of t...

Solar Power to the People
You read about it every day: How can we create a sustainable, reliable and affordable energy supply? Does a local water supply play a role in this? Why don't we drive hydrogen cars that are powered by the sun and rain? The availability of cheap green energy is increasing. . We have solar and wind power, and even energy derived from ambient hea...

What Is Data Science?
We've all heard it: according to Hal Varian, statistics is the next sexy job. Five years ago, in What is Web 2.0, Tim O'Reilly said that "data is the next Intel Inside." But what does that statement mean? Why do we suddenly care about statistics and about data? This report examines the many sides of data science - the technologi...