Welcome to the Twenty-First Century 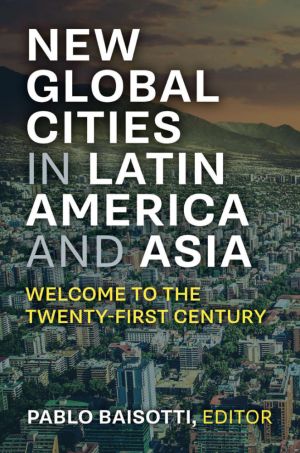 New Global Cities in Latin America and Asia: Welcome to the Twenty-First Century proposes new visions of global cities and regions historically considered "secondary" in the international context. The arguments are not only based on material progress made by these metropolises, but also on the growing social difficulties experienced (e.g., organized crime, drug trafficking, slums, economic inequalities). The book illustrates the growth of cities according to these problems arising from the modernity of the new century, comparing Latin American and Asian cities.

This book analyzes the complex relationships within cities through an interdisciplinary approach, complementing other research and challenging orthodox views on global cities. At the same time, the book provides new theoretical and methodological tools to understand the progress of "Third World" cities and the way of understanding "globality" in the 21st century by confronting the traditional views with which global cities were appreciated since the 1980s. Pablo Baisotti brings together researchers from various fields who provide new interpretative keys to certain cities in Latin America and Asia.

This open book is licensed under a Creative Commons License (CC BY). You can download New Global Cities in Latin America and Asia ebook for free in PDF format (11.4 MB).

PART I
ASIA: CENTER OF GROWTH AND GLOBALISM
Chapter 1
Chinese Cities from the Ground to the Sky: Building Suzhou as a Global City beyond Tradition
Chapter 2
The Urban Geographies of a Small Island: A Dialectical Spatial Approach
Chapter 3
The Rise of Chongqing and Queretaro: The Territorial Dimension of the Divergent Trajectories of Two Emerging Urban Economies in China and Mexico
Chapter 4
Migration, Expatriation, and Heterosexuality in a Globalized City-Singapore
Chapter 5
City-Regions Reconsidered
PART II
LATIN AMERICA: OPENING, GLOBALIZATION, AND CRISIS
Chapter 6
Global Cities in Peripheral Countries: Argentina in the New International Labor Division
Chapter 7
The Regional Planning, Development, and Governance of Metropolitan Secondary City Clusters: A Case Study of Santiago and the Central Chile Region
Chapter 8
Changes in Consumption in Peru during the Globalization Process
Chapter 9
Urban Conflict and Transnational Crime in Latin American Cities
Chapter 10
The Emergence of a Global Urban Region: The Urban Corridor Automotive and Aeronautical Industries in the Central-Bajío Region, Mexico
Chapter 11
Economy, Inequalities, and Cities: Chinese Influence in Latin America

Environmental Governance in Latin America
The multiple purposes of nature - livelihood for communities, revenues for states, commodities for companies, and biodiversity for conservationists - have turned environmental governance in Latin America into a highly contested arena. In such a resource-rich region, unequal power relations, conflicting priorities, and trade-offs among multiple goal...

Firm Innovation and Productivity in Latin America and the Caribbean
This volume uses the study of firm dynamics to investigate the factors preventing faster productivity growth in Latin America and the Caribbean, pushing past the limits of traditional macroeconomic analyses. Each chapter is dedicated to an examination of a different factor affecting firm productivity - innovation, ICT usage, on-the-job-training, fi...

Mathematics Teacher Preparation in Central America and the Caribbean
This open book is an excellent synthesis of the initial and continuing preparation for Mathematics Teaching in Colombia, Costa Rica, Dominican Republic and Venezuela, from which comparative analyses can be made that show similarities and differences, and highlight various perspectives. In August 2012, a workshop of the Capacity and Networking Proj...

Indigenous Cultures and Sustainable Development in Latin America
This book outlines development theory and practice overtime as well as critically interrogates the "cultural turn" in development policy in Latin American indigenous communities, specifically, in Guatemala, Honduras, Ecuador, and Bolivia. It becomes apparent that culturally sustainable development is both a new and old idea, which is simu...