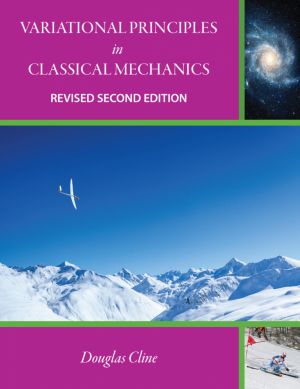 Two dramatically different philosophical approaches to classical mechanics were proposed during the 17th - 18th centuries. Newton developed his vectorial formulation that uses time-dependent differential equations of motion to relate vector observables like force and rate of change of momentum. Euler, Lagrange, Hamilton, and Jacobi, developed powerful alternative variational formulations based on the assumption that nature follows the principle of least action. These variational formulations now play a pivotal role in science and engineering. This book introduces variational principles and their application to classical mechanics. The relative merits of the intuitive Newtonian vectorial formulation, and the more powerful variational formulations are compared. Applications to a wide variety of topics illustrate the intellectual beauty, remarkable power, and broad scope provided by use of variational principles in physics.

This 2nd edition adds discussion of the use of variational principles applied to the following topics:
1) Systems subject to initial boundary conditions;
2) The hierarchy of the related formulations based on action, Lagrangian, Hamiltonian, and equations of motion, to systems that involve symmetries;
3) Non-conservative systems;
4) Variable-mass systems;
5) The General Theory of Relativity.

This open book is licensed under a Creative Commons License (CC BY-NC-SA). You can download Variational Principles in Classical Mechanics ebook for free in PDF format (16.9 MB).

Handbook of Contact Mechanics
This book contains a structured collection of complete solutions of all significant axially symmetric contact problems. It provides solutions for classical profiles such as the sphere, cone or flat cylindrical punch as well as a multitude of other technically relevant shapes, e.g. the truncated cone, the worn sphere, rough profiles, hollow cylinder...

Principles of Mechanics
This open access textbook takes the reader step-by-step through the concepts of mechanics in a clear and detailed manner. Mechanics is considered to be the core of physics, where a deep understanding of the concepts is essential in understanding all branches of physics. Many proofs and examples are included to help the reader grasp the fundamentals...

Problems in Classical Electromagnetism
This book contains 157 problems in classical electromagnetism, most of them new and original compared to those found in other textbooks. Each problem is presented with a title in order to highlight its inspiration in different areas of physics or technology, so that the book is also a survey of historical discoveries and applications of classical e...

IUTAM
This book presents extensive information related to the history of IUTAM. The initial chapters focus on IUTAM's history and selected organizational aspects. Subsequent chapters provide extensive data and statistics, while the closing section showcases photos from all periods of the Union's history.The history of IUTAM, the International U...

An Introduction to Soil Mechanics
This book offers a superb introduction to theoretical and practical soil mechanics. Special attention is given to the risks of failure in civil engineering, and themes covered include stresses in soils, groundwater flow, consolidation, testing of soils, and stability of slopes. Readers will learn the major principles and methods of soil mechanics,...