Who Will Be the Next President?

A Guide to the U.S. Presidential Election System 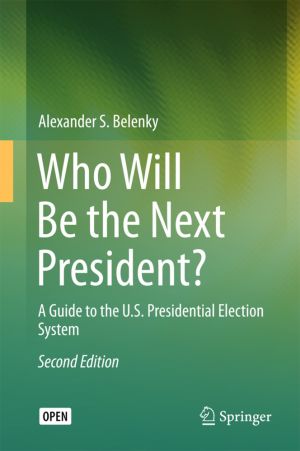 Describes a new plan to improve the current election system under which every voter gains and no state loses its current Electoral College benefits, which has a chance to be introduced in the form of a constitutional amendment.

Provides explanations of why the National Popular Vote plan may violate the Equal Protection Clause from the Fourteenth Amendment and why the underlying claim of the plan is no more than wishful thinking of its originators and proponents.

Analyses what the Founding Fathers overlooked and describes a logical mistake that they made in the initial design of the presidential election system.

This open book is licensed under a Creative Commons License (CC BY). You can download Who Will Be the Next President? ebook for free in PDF format (1.8 MB).

The Cellular Automaton Interpretation of Quantum Mechanics
This book presents the deterministic view of quantum mechanics developed by Nobel Laureate Gerard 't Hooft.Dissatisfied with the uncomfortable gaps in the way conventional quantum mechanics meshes with the classical world, 't Hooft has revived the old hidden variable ideas, but now in a much more systematic way than usual. In this, quantum mechanic...

Cultural Heritage Ethics
Theory without practice is empty, practice without theory is blind, to adapt a phrase from Immanuel Kant. The sentiment could not be truer of cultural heritage ethics. This intra-disciplinary book bridges the gap between theory and practice by bringing together a stellar cast of academics, activists, consultants, journalists, lawyers, and museum pr...

The Climate-Smart Agriculture Papers
This volume shares new data relating to Climate-Smart Agriculture (CSA), with emphasis on experiences in Eastern and Southern Africa. The book is a collection of research by authors from over 30 institutions, spanning the public and private sectors, with specific knowledge on agricultural development in the region discussed. The material is assembl...