Comics Beyond the Page in Latin America 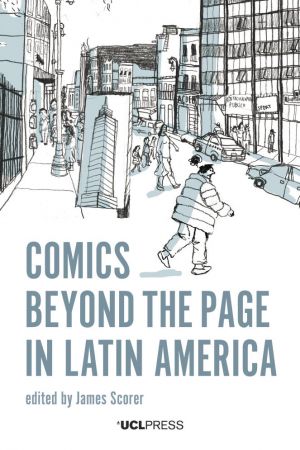 Comics Beyond the Page in Latin America is a cutting-edge study of the expanding worlds of Latin American comics. Despite lack of funding and institutional support, not since the mid-twentieth century have comics in the region been so dynamic, so diverse and so engaged with pressing social and cultural issues. Comics are being used as essential tools in debates about, for example, digital cultures, gender identities and political disenfranchisement.

Rather than analysing the current boom in comics by focusing just on the printed text, however, this book looks at diverse manifestations of comics 'beyond the page'. Contributors explore digital comics and social media networks; comics as graffiti and stencil art in public spaces; comics as a tool for teaching architecture or processing social trauma; and the consumption and publishing of comics as forms of shaping national, social and political identities.

Bringing together authors from across Latin America and beyond, and covering examples from Argentina, Brazil, Colombia, Mexico, Peru and Uruguay, the book sets out a panoramic vision of Latin American comics, whether in terms of scholarly contribution, geographical diversity or interdisciplinary methodologies.

Comics Beyond the Page in Latin America demonstrates the importance of studying how comics circulate in all manner of ways beyond print media. It also reminds us of the need to think about the creative role of comics in societies with less established comics markets than in Europe, the US and Asia.

This open book is licensed under a Creative Commons License (CC BY-NC-ND). You can download Comics Beyond the Page in Latin America ebook for free in PDF format (40.3 MB).

Chapter 1
Latin American Comics Beyond the Page
Chapter 2
El Volcán: Forging Global Comics Cultures through Alliances, Networks and Self-Branding
Chapter 3
From the Golden Age to Independent Publishing: Mass Culture, Popular Culture and National Imaginaries in the History of Argentine Comics
Chapter 4
The Comics Scene in Colombian Cities
Chapter 5
The Authors of Contracultura Publishing, Self-Portrayal and the Graphic Novel
Chapter 6
Expanded Visual Experiences and the Expressive Possibilities of the Digital Comic in the Work of Alejandra Gámez
Chapter 7
Autographic Selfies: Digital Comics, Social Media and Networked Photography
Chapter 8
Comics on the Walls: The Zé Ninguém Street Comics and the Experience of the Outsider View of Rio de Janeiro
Chapter 9
'The Nestornaut', or How a President Becomes a Comic Superhero
Chapter 10
Comics and Teaching Architecture in Uruguay
Chapter 11
Preguntas sin respuestas: Notes on Teaching the Armed Conflict in Perú

Environmental Governance in Latin America
The multiple purposes of nature - livelihood for communities, revenues for states, commodities for companies, and biodiversity for conservationists - have turned environmental governance in Latin America into a highly contested arena. In such a resource-rich region, unequal power relations, conflicting priorities, and trade-offs among multiple goal...

Indigenous Cultures and Sustainable Development in Latin America
This book outlines development theory and practice overtime as well as critically interrogates the "cultural turn" in development policy in Latin American indigenous communities, specifically, in Guatemala, Honduras, Ecuador, and Bolivia. It becomes apparent that culturally sustainable development is both a new and old idea, which is simu...

Firm Innovation and Productivity in Latin America and the Caribbean
This volume uses the study of firm dynamics to investigate the factors preventing faster productivity growth in Latin America and the Caribbean, pushing past the limits of traditional macroeconomic analyses. Each chapter is dedicated to an examination of a different factor affecting firm productivity - innovation, ICT usage, on-the-job-training, fi...