Architecture and the Novel under the Italian Fascist Regime 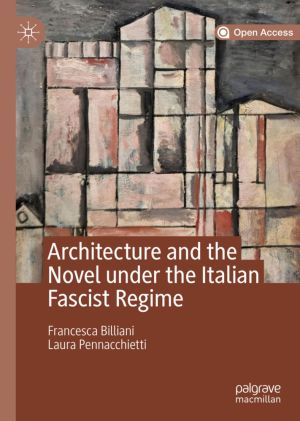 Architecture and the Novel under the Italian Fascist Regime discusses the relationship between the novel and architecture during the Fascist period in Italy (1922-1943). By looking at two profoundly diverse aesthetic phenomena within the context of the creation of a Fascist State art, Billiani and Pennacchietti argue that an effort of construction, or reconstruction, was the main driving force behind both projects: the advocated "revolution" of the novel form (realism) and that of architecture (rationalism). The book is divided into seven chapters, which in turn analyze the interconnections between the novel and architecture in theory and in practice. The first six chapters cover debates on State art, on the novel and on architecture, as well as their historical development and their unfolding in key journals of the period. The last chapter offers a detailed analysis of some important novels and buildings, which have in practice realized some of the key principles articulated in the theoretical disputes.Francesca Billiani is Senior Lecturer in Italian Studies and Director of the Centre for Interdisciplinary Research in the Arts and Languages at the University of Manchester, UK.

Laura Pennacchietti is Research Associate in Italian Studies at the University of Manchester, UK.

"Francesca Billiani and Laura Pennacchietti draw brilliantly and with precision the evolution of the new architecture and of the national novel (with insights on translations of international novels), whose profiles had been shaped from different angles, especially in the 1930s. These two fields, apparently so distant one from the other, had never been analysed in parallel. This book does this and uncovers several points of contact between the two, spanning propaganda and theoretical turning points." - Chiara Costa and Cornelia Mattiacci, Fondazione Prada, Italy

"This book shows convincingly how the arte di Stato during Fascism was created with the morality of a new novel as well as architecture. It is surprising to read how one of the representatives of State art, Giuseppe Bottai, is also one of the finest critics of realist novels and rationalist architecture. More than parallel endeavours, the system of the arts during the Fascist regime should be viewed as a series of intersections of cultural, political and aesthetic discourses." - Monica Jansen, Utrecht University, The Netherlands.

This open book is licensed under a Creative Commons License (CC BY). You can download Architecture and the Novel under the Italian Fascist Regime ebook for free in PDF format (3.4 MB).

Understanding the DOM
JavaScript is the de facto programming language of the web, but the language itself does not include any built-in method for working with input/output (I/O), such as graphics display and sound. Instead, the web browser provides an API for accessing the HTML document in a tree structure known as the Document Object Model (DOM). The combination of Ja...

Cosmology for the Curious
This book is an introductory text for all those wishing to learn about modern views of the cosmos. Our universe originated in a great explosion – the big bang. For nearly a century cosmologists have studied the aftermath of this explosion: how the universe expanded and cooled down, and how galaxies were gradually assembled by gravity. The nature ...

The Hindu Kush Himalaya Assessment
This open access volume is the first comprehensive assessment of the Hindu Kush Himalaya (HKH) region. It comprises important scientific research on the social, economic, and environmental pillars of sustainable mountain development and will serve as a basis for evidence-based decision-making to safeguard the environment and advance people's w...