Finding the Limits of the Limes

Modelling Demography, Economy and Transport on the Edge of the Roman Empire 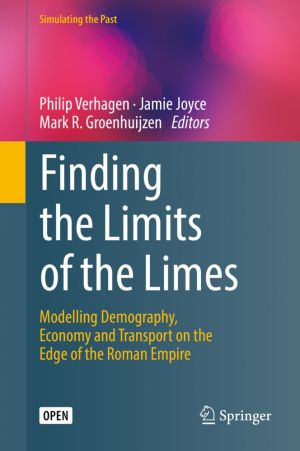 This book demonstrates the application of simulation modelling and network analysis techniques in the field of Roman studies. It summarizes and discusses the results of a 5-year research project carried out by the editors that aimed to apply spatial dynamical modelling to reconstruct and understand the socio-economic development of the Dutch part of the Roman frontier (limes) zone, in particular the agrarian economy and the related development of settlement patterns and transport networks in the area. The project papers are accompanied by invited chapters presenting case studies and reflections from other parts of the Roman Empire focusing on the themes of subsistence economy, demography, transport and mobility, and socio-economic networks in the Roman period.The book shows the added value of state-of-the-art computer modelling techniques and bridges computational and conventional approaches. Topics that will be of particular interest to archaeologists are the question of (forced) surplus production, the demographic and economic effects of the Roman occupation on the local population, and the structuring of transport networks and settlement patterns. For modellers, issues of sensitivity analysis and validation of modelling results are specifically addressed. This book will appeal to students and researchers working in the computational humanities and social sciences, in particular, archaeology and ancient history.

This open book is licensed under a Creative Commons License (CC BY). You can download Finding the Limits of the Limes ebook for free in PDF format (8.8 MB).

Horos: Ancient Boundaries and the Ecology of Stone
In Horos, Thea Potter explores the complex relationship between classical philosophy and the 'horos', a stone that Athenians erected to mark the boundaries of their marketplace, their gravestones, their roads and their private property. Potter weaves this history into a meditation on the ancient philosophical concept of horos, the foundat...