Conviviality at the Crossroads

The Poetics and Politics of Everyday Encounters 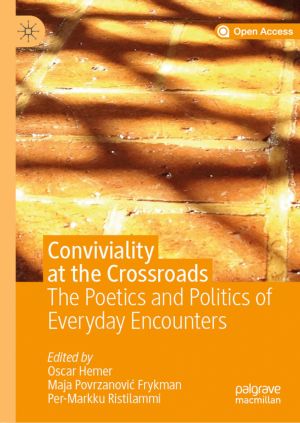 Conviviality has lately become a catchword not only in academia but also among political activists. This open access book discusses conviviality in relation to the adjoining concepts cosmopolitanism and creolisation. The urgency of today's global predicament is not only an argument for the revival of all three concepts, but also a reason to bring them into dialogue. Ivan Illich envisioned a post-industrial convivial society of 'autonomous individuals and primary groups' (Illich 1973), which resembles present-day manifestations of 'convivialism'. Paul Gilroy refashioned conviviality as a substitute for cosmopolitanism, denoting an ability to be 'at ease' in contexts of diversity (Gilroy 2004). Rather than replacing one concept with the other, the fourteen contributors to this book seek to explore the interconnections – commonalities and differences – between them, suggesting that creolisation is a necessary complement to the already-intertwined concepts of conviviality and cosmopolitanism. Although this volume takes northern Europe as its focus, the contributors take care to put each situation in historical and global contexts in the interests of moving beyond the binary thinking that prevails in terms of methodologies, analytical concepts, and political implementations.

This open book is licensed under a Creative Commons License (CC BY). You can download Conviviality at the Crossroads ebook for free in PDF format (4.0 MB).

Research on Teaching and Learning Mathematics at the Tertiary Level
This topical survey focuses on research in tertiary mathematics education, a field that has experienced considerable growth over the last 10 years. Drawing on the most recent journal publications as well as the latest advances from recent high-quality conference proceedings, our review culls out the following five emergent areas of interest: mathem...