Knowledge and Practice at the Russian, Chinese and Mongolian Border 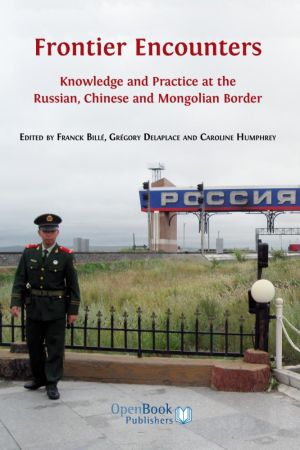 China and Russia are rising economic and political powers that share thousands of miles of border. Yet, despite their proximity, their practical, local interactions with each other - and with their third neighbour Mongolia - are rarely discussed. The three countries share a boundary, but their traditions, languages and worldviews are remarkably different.

Frontier Encounters presents a wide range of views on how the borders between these unique countries are enacted, produced, and crossed. It sheds light on global uncertainties: China's search for energy resources and the employment of its huge population, Russia's fear of Chinese migration, and the precarious economic independence of Mongolia as its neighbours negotiate to extract its plentiful resources.

Bringing together anthropologists, sociologists and economists, this timely collection of essays offers new perspectives on an area that is currently of enormous economic, strategic and geo-political relevance.

This collective volume is the outcome of a network project funded by the ESRC (RES-075-25_0022) entitled "Where Empires Meet: The Border Economies of Russia, China and Mongolia". The project, based at the Mongolia and Inner Asia Studies Unit (University of Cambridge), ran from 28 January 2010 to 27 January 2011. That project formed the foundation for a new and ongoing research project "The life of borders: where China and Russia meet" which commenced in October 2012.

This open book is licensed under a Creative Commons License (CC BY). You can download Frontier Encounters ebook for free in PDF format (13.1 MB).

Chapter 1
A Slightly Complicated Door: The Ethnography and Conceptualisation of North Asian Borders
Chapter 2
On Ideas of the Border in the Russian and Chinese Social Imaginaries
Chapter 3
Rethinking Borders in Empire and Nation at the Foot of the Willow Palisade
Chapter 4
Concepts of "Russia" and their Relation to the Border with China
Chapter 5
Chinese Migrants and Anti-Chinese Sentiments in Russian Society
Chapter 6
The Case of the Amur as a Cross-Border Zone of Illegality
Chapter 7
Prostitution and the Transformation of the Chinese Trading Town of Ereen
Chapter 8
Ritual, Memory and the Buriad Diaspora Notion of Home
Chapter 9
Politicisation of Quasi-Indigenousness on the Russo-Chinese Frontier
Chapter 10
People of the Border: The Destiny of the Shenehen Buryats
Chapter 11
The Persistence of the Nation-State at the Chinese-Kazakh Border
Chapter 12
Neighbours and their Ruins: Remembering Foreign Presences in Mongolia
Appendix 1
Border-Crossing Infrastructure: The Case of the Russian-Mongolian Border

Conviviality at the Crossroads
Conviviality has lately become a catchword not only in academia but also among political activists. This open access book discusses conviviality in relation to the adjoining concepts cosmopolitanism and creolisation. The urgency of today's global predicament is not only an argument for the revival of all three concepts, but also a reason to bring t...

Disability and Vocational Rehabilitation in Rural Settings
This first-of-its-kind textbook surveys rehabilitation and vocational programs aiding persons with disabilities in remote and developing areas in the U.S. and abroad. Contributors discuss longstanding challenges to these communities, most notably economic and environmental obstacles and ongoing barriers to service delivery, as well as their resilie...