Between Contention and Connection 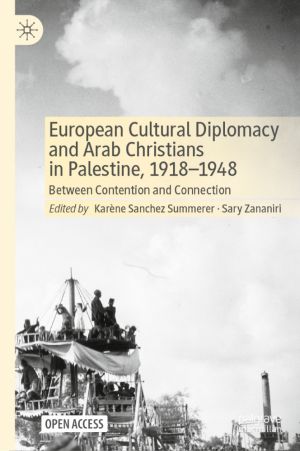 This open book investigates the transnationally connected history of Arab Christian communities in Palestine during the British Mandate (1918-1948) through the lens of the birth of cultural diplomacy. Relying predominantly on unpublished sources, it examines the relationship between European cultural agendas and local identity formation processes and discusses the social and religious transformations of Arab Christian communities in Palestine via cultural lenses from an entangled perspective.

The 17 chapters reflect diverse research interests, from case studies of individual archives to chapters that question the concept of cultural diplomacy more generally. They illustrate the diversity of scholarship that enables a broad-based view of how cultural diplomacy functioned during the interwar period, but also the ways in which its meanings have changed. The book considers British Mandate Palestine as an internationalised node within a transnational framework to understand how the complexity of cultural interactions and agencies engaged to produce new modes of modernity.

​Karène Sanchez Summerer is Associate Professor at Leiden University, The Netherlands. Her research considers the European linguistic and cultural policies and the Arab communities (1860-1948) in Palestine. She is the PI of the research project (2017-2022), 'CrossRoads: European Cultural Diplomacy and Arab Christians in Palestine (1918-1948)' (project funded by The Netherlands National Research Agency, NWO). She is the co-editor of the series 'Languages and Culture in History' with W. Frijhoff, Amsterdam University Press. She is part of the College of Experts: ESF European Science Foundation (2018-2021).

Sary Zananiri is an artist and cultural historian.He is currently a Postdoctoral Fellow on the NWO funded project 'CrossRoads: European Cultural Diplomacy and Arab Christians in Palestine (1918-1948)' at Leiden University, The Netherlands.

This open book is licensed under a Creative Commons License (CC BY). You can download European Cultural Diplomacy and Arab Christians in Palestine, 1918-1948 ebook for free in PDF format (8.9 MB).

Foundations of Behavioral Health
This comprehensive book examines the organization, financing, delivery, and outcomes of behavioral health (i.e., alcohol, drug abuse, and mental health) services from both U.S. and global perspectives. Addressing the need for more integrative and collaborative approaches in public health and behavioral health initiatives, the book covers the fundam...

Agency and Causal Explanation in Economics
This open access book provides an exploration of the consequences of the ontological differences between natural and social objects (sometimes described as objects of nature and objects of thought) in the workings of causal and agency relationships. One of its important and possibly original conclusions is that causal and agency relationships do no...