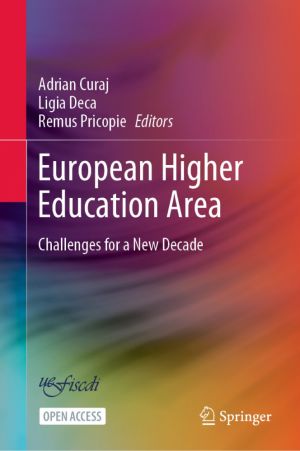 This open book highlights the major outcomes of the fourth edition of the Future of Higher Education - Bologna Process Researchers Conference (January 2020), which has already established itself as a landmark in the European higher education environment. The conference provides a unique forum for dialogue between researchers, experts and policy makers in the field of higher education, all of which is documented in this proceedings volume.

The publication focuses on topics of high interest for the European higher education debates, in line with the Paris Ministerial Communiqué priorities, such as furthering internationalization of higher education, access and success for every learner in higher education, advancing learning and teaching in the EHEA: innovation and links with research, the future of the EHEA - principles, challenges and ways forward or Bologna Process in the global higher education arena in terms of going digital.

European Higher Education Area: Challenges for a New Decade marks 21 years of Bologna Process and 10 years of EHEA and brings together a unique collection of contributions that not only reflect on all that has been achieved in these years, but more importantly, shape directions for the future.

"Taking the long view, I continue to believe that the Bologna process is one of the only truly pan-European, democratic processes that we have developed in Europe, including the broader Europe. As such, it is crucial to our European identity that it continues to flourish, as one of the few cross border initiatives that unites all European countries and people, in our case, in particular, the pan European academic community.

European universities have long played an important role in the European project. Since the founding of the EUA in May 2001, and even before, one of its goals focused on the importance of higher education institutions playing an active and comprehensive role in the Bologna Process, across the continent, thus contributing to the creation of a vibrant European civil society.

Now, in 2020, we look forward to the next round of Bologna discussions, planned to be held in Rome, at a time when not only in Europe, but also world-wide, the challenges are daunting. Therefore we need to continue to work together, and pool our resources together across the continent, and maintain the Bologna spirit and ingenuity that has enabled us to move forward together, over more than two decades.

Europe has gone through several crises and European integration has never been straightforward. As stated in the Schuman Declaration in 1950 "Europe will not be made all at once, or according to a single plan. It will be built through concrete achievements which first create a de facto solidarity."

This open book is licensed under a Creative Commons License (CC BY). You can download European Higher Education Area: Challenges for a New Decade ebook for free in PDF format (9.9 MB).