Work and Food Culture of the Mumbai Dabbawalas 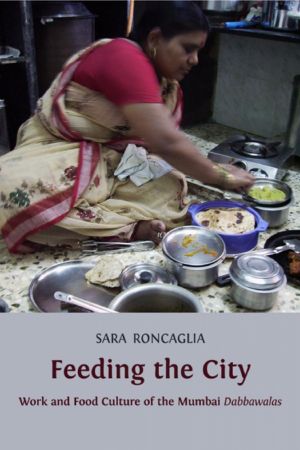 Every day in Mumbai 5,000 dabbawalas (literally translated as "those who carry boxes") distribute a staggering 200,000 home-cooked lunchboxes to the city's workers and students. Giving employment and status to thousands of largely illiterate villagers from Mumbai's hinterland, this co-operative has been in operation since the late nineteenth century. It provides one of the most efficient delivery networks in the world: only one lunch in six million goes astray.

Feeding the City is an ethnographic study of the fascinating inner workings of Mumbai's dabbawalas. Cultural anthropologist Sara Roncaglia explains how they cater to the various dietary requirements of a diverse and increasingly global city, where the preparation and consumption of food is pervaded with religious and cultural significance. Developing the idea of "gastrosemantics" - a language with which to discuss the broader implications of cooking and eating - Roncaglia's study helps us to rethink our relationship to food at a local and global level.

This open book is licensed under a Creative Commons License (CC BY-ND). You can download Feeding the City ebook for free in PDF format (3.8 MB).

Part 1
Bombay-Mumbai and the Dabbawalas: Origin and Development of a Parallel Economy
Part 2
Dabbawala Ethics in Transition
Part 3
Nutan Mumbai Tiffin Box Suppliers Charity Trust: The Shaping of Dabbawala Relations
Conclusions
Tastes and Cultures
Appendix
Theory and Practice for an Ethnography of Diversities

Sustainable Food Systems
Faced with a global threat to food security, it is perfectly possible that society will respond, not by a dystopian disintegration, but rather by reasserting co-operative traditions. This book, by a leading expert in urban agriculture, offers a genuine solution to today's global food crisis. By contributing more to feeding themselves, cities c...

Innovation Capacity and the City
This free book represents one of the key milestones of DESIGNSCAPES, an H2020 CSA (Coordination and Support Action) research project funded by the European Commission under the Call "User-driven innovation: value creation through design-enabled innovation". The book demonstrates that adopting design allows us to embed innovation within th...

Musical Cities
Musical Cities represents an innovative approach to scholarly research and dissemination. A digital and interactive 'book', it explores the rhythms of our cities, and the role they play in our everyday urban lives, through the use of sound and music. Sara Adhitya first discusses why we should listen to urban rhythms in order to design ...

AiREAS: Sustainocracy for a Healthy City
This book describes the coming about and first results of the AiREAS "healthy city" cooperative in the city of Eindhoven and Province of North Brabant in the Netherlands. AiREAS is an initiative focused on the multidisciplinary co-creation of healthy cities using the core human value of human health and air quality as guiding principle fo...