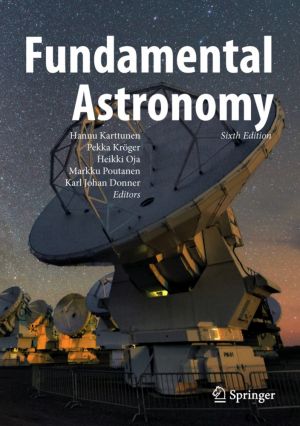 Now in its sixth edition this successful undergraduate textbook gives a well-balanced and comprehensive introduction to the topics of classical and modern astronomy. While emphasizing both the astronomical concepts and the underlying physical principles, the text provides a sound basis for more profound studies in the astronomical sciences. The chapters on galactic and extragalactic astronomy as well as cosmology were extensively modernized in the previous edition. In this new edition they have been further revised to include more recent results. The long chapter on the solar system has been split into two parts: the first one deals with the general properties, and the other one describes individual objects. A new chapter on exoplanets has been added to the end of the book next to the chapter on astrobiology.In response to the fact that astronomy has evolved enormously over the last few years, only a few chapters of this book have been left unmodified.Long considered a standard text for physical science majors, Fundamental Astronomy is also an excellent reference and entrée for dedicated amateur astronomers. For their benefit the introductory chapter has been extended to give a brief summary of the different types of celestial objects.From reviews of earlier editions:
"… The wide range of expertise gives the book an authority that would be almost impossible for a single-author text ... There are other aids to the reader: worked examples ... starred sections in small print take the inquisitive reader beyond the general level of the book." (Nature)
“This textbook, suitable for a university first course in astronomy, is the outgrowth of a long and outstanding astronomical tradition in Finland, and the result of an extensive collaborative effort, which included also teaching and interaction with many people. … I highly recommend this book for class use … it will be useful for professionals as well.” (Bruno Bertotti, Prometeo, Vol. 24 (3-4), 2008)

This open book is licensed under a Creative Commons License (CC BY). You can download Fundamental Astronomy ebook for free in PDF format (25.5 MB).

Interferometry and Synthesis in Radio Astronomy
The 3rd edition of this indispensable book in radio interferometry provides extensive updates to the 2nd edition, including results and technical advances from the past decade; discussion of arrays that now span the full range of the radio part of the electromagnetic spectrum observable from the ground, 10 MHz to 1 THz; an analysis of factors that ...

Fundamentals of Biomechanics
This book integrates the classic fields of mechanics - statics, dynamics, and strength of materials - using examples from biology and medicine. The book is excellent for teaching either undergraduates in biomedical engineering programs or health care professionals studying biomechanics at the graduate level. Extensively revised from a successful th...

Open Skies
This open book on the history of the National Radio Astronomy Observatory covers the scientific discoveries and technical innovations of late 20th century radio astronomy with particular attention to the people and institutions involved. The authors have made extensive use of the NRAO Archives, which contain an unparalleled collection of documents ...