National Constitutions in European and Global Governance: Democracy, Rights, the Rule of Law 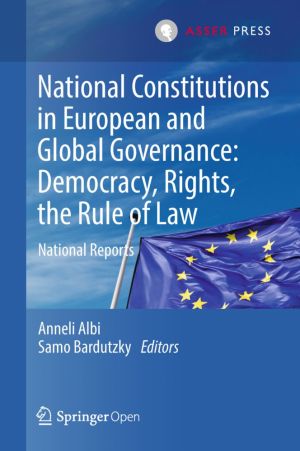 This two-volume book, published open access, brings together leading scholars of constitutional law from twenty-nine European countries to revisit the role of national constitutions at a time when decision-making has increasingly shifted to the European and transnational level. It offers important insights into three areas. First, it explores how constitutions reflect the transfer of powers from domestic to European and global institutions. Secondly, it revisits substantive constitutional values, such as the protection of constitutional rights, the rule of law, democratic participation and constitutional review, along with constitutional court judgments that tackle the protection of these rights and values in the transnational context, e.g. with regard to the Data Retention Directive, the European Arrest Warrant, the ESM Treaty, and EU and IMF austerity measures. The responsiveness of the ECJ regarding the above rights and values, along with the standard of protection, is also assessed. Thirdly, challenges in the context of global governance in relation to judicial review, democratic control and accountability are examined. On a broader level, the contributors were also invited to reflect on what has increasingly been described as the erosion or 'twilight' of constitutionalism, or a shift to a thin version of the rule of law, democracy and judicial review in the context of Europeanisation and globalisation processes.

The national reports are complemented by a separately published comparative study, which identifies a number of broader trends and challenges that are shared across several Member States and warrant wider discussion. The research for this publication and the comparative study were carried out within the framework of the ERC-funded project 'The Role and Future of National Constitutions in European and Global Governance'.

The book is aimed at scholars, researchers, judges and legal advisors working on the interface between national constitutional law and EU and transnational law. The extradition cases are also of interest to scholars and practitioners in the field of criminal law.

This open book is licensed under a Creative Commons License (CC BY). You can download National Constitutions in European and Global Governance: Democracy, Rights, the Rule of Law ebook for free in PDF format (13.0 MB).

Illiberal Trends and Anti-EU Politics in East Central Europe
This open book provides an in-depth look into the background of rule of law problems and the open defiance of EU law in East Central European countries. Current illiberal trends and anti-EU politics have the potential to undermine mutual trust between member states and fundamentally change the EU. It is therefore crucial to understand their domesti...