With a Tribute to Rolf Hagedorn 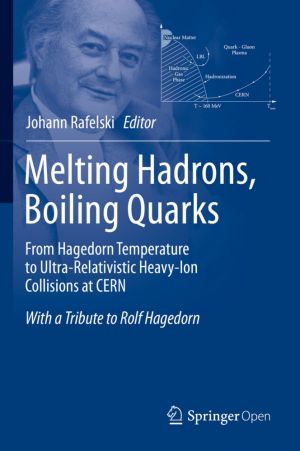 This book shows how the study of multi-hadron production phenomena in the years after the founding of CERN culminated in Hagedorn's pioneering idea of limiting temperature, leading on to the discovery of the quark-gluon plasma -- announced, in February 2000 at CERN.Following the foreword by Herwig Schopper -- the Director General (1981-1988) of CERN at the key historical juncture -- the first part is a tribute to Rolf Hagedorn (1919-2003) and includes contributions by contemporary friends and colleagues, and those who were most touched by Hagedorn: Tamás Biró, Igor Dremin, Torleif Ericson, Marek Gaździcki, Mark Gorenstein, Hans Gutbrod, Maurice Jacob, István Montvay, Berndt Müller, Grazyna Odyniec, Emanuele Quercigh, Krzysztof Redlich, Helmut Satz, Luigi Sertorio, Ludwik Turko, and Gabriele Veneziano.The second and third parts retrace 20 years of developments that after discovery of the Hagedorn temperature in 1964 led to its recognition as the melting point of hadrons into boiling quarks, and to the rise of the experimental relativistic heavy ion collision program. These parts contain previously unpublished material authored by Hagedorn and Rafelski: conference retrospectives, research notes, workshop reports, in some instances abbreviated to avoid duplication of material, and rounded off with the editor's explanatory notes.About the editor: Johann Rafelski is a theoretical physicist working at The University of Arizona in Tucson, USA. Born in 1950 in Krakow, Poland, he received his Ph.D. with Walter Greiner in Frankfurt, Germany in 1973. Rafelski arrived at CERN in 1977, where in a joint effort with Hagedorn he contributed greatly to the establishment of the relativistic heavy ion collision, and quark-gluon plasma research fields. Moving on, with stops in Frankfurt and Cape Town, to Arizona, he invented and developed the strangeness quark flavor as the signature of quark-gluon plasma.

This open book is licensed under a Creative Commons License (CC BY-NC). You can download Melting Hadrons, Boiling Quarks - From Hagedorn Temperature to Ultra-Relativistic Heavy-Ion Collisions at CERN ebook for free in PDF format (8.9 MB).

The Web as History
he World Wide Web has now been in use for more than 20 years. From early browsers to today's principal source of information, entertainment and much else, the Web is an integral part of our daily lives, to the extent that some people believe 'if it's not online, it doesn't exist.' While this statement is not entirely true, ...

High Density Lipoproteins
In this Handbook of Experimental Pharmacology on "High Density Lipoproteins – from biological understanding to clinical exploitation" contributing authors (members of COST Action BM0904/HDLnet) summarize in more than 20 chapters our current knowledge on the structure, function, metabolism and regulation of HDL in health and several dise...

The Models of Engaged Learning and Teaching
This book provides a practical philosophy for promoting students' sophisticated thinking from Early Childhood to PhD in ways that explicitly interconnect across the years of education. It will help teachers, academics and the broader learning and teaching community to understand and implement these connections by introducing a conceptual frame...

Communicating Science
Modern science communication has emerged in the twentieth century as a field of study, a body of practice and a profession - and it is a practice with deep historical roots. We have seen the birth of interactive science centres, the first university actions in teaching and conducting research, and a sharp growth in employment of science communicato...

Particle Physics Reference Library
This first open access volume of the handbook series contains articles on the standard model of particle physics, both from the theoretical and experimental perspective. It also covers related topics, such as heavy-ion physics, neutrino physics and searches for new physics beyond the standard model. A joint CERN-Springer initiative, the “Particl...