Rethinking Translocality Beyond Central Asia and the Caucasus 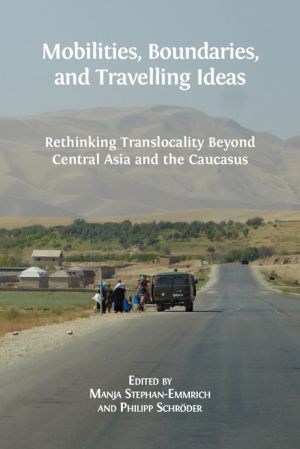 This collection brings together a variety of anthropological, historical and sociological case studies from Central Asia and the Caucasus to examine the concept of translocality. The chapters scrutinize the capacity of translocality to describe, in new ways, the multiple mobilities, exchange practices and globalizing processes that link places, people and institutions in Central Asia and the Caucasus with others in Russia, China and the United Arab Emirates.

Illuminating translocality as a productive concept for studying cross‐regional connectivities and networks, this volume is an important contribution to a lively field of academic discourse. Following new directions in Area Studies, the chapters aim to overcome 'territorial containers' such as the nation‐state or local community, and instead emphasize the significance of processes of translation and negotiation for understanding how meaningful localities emerge beyond conventional boundaries.

Structured by the four themes 'crossing boundaries', 'travelling ideas', 'social and economic movements' and 'pious endeavours', this volume proposes three conceptual approaches to translocality: firstly, to trace how it is embodied, narrated, virtualized or institutionalized within or in reference to physical or imagined localities; secondly, to understand locality as a relational concept rather than a geographically bounded unit; and thirdly, to consider cross‐border traders, travelling students, business people and refugees as examples of non-elite mobilities that provide alternative ways to think about what 'global' means today.

Mobilities, Boundaries, and Travelling Ideas will be of interest to students and scholars of the anthropology, history and sociology of Central Asia and the Caucasus, as well as for those interested in new approaches to Area Studies.

This open book is licensed under a Creative Commons License (CC BY). You can download Mobilities, Boundaries, and Travelling Ideas ebook for free in PDF format (27.0 MB).

Introduction
Mobilities, Boundaries, and Travelling Ideas Beyond Central Asia and the Caucasus: A Translocal Perspective
Part 1
Crossing Boundaries: Mobilities Then and Now
Chapter 1
Emigration Within, Across, and Beyond Central Asia in the Early Soviet Period from a Perspective of Translocality
Chapter 2
Crossing Economic and Cultural Boundaries: Tajik Middlemen in the Translocal 'Dubai Business' Sector
Part 2
Travelling Ideas: Sacred and Secular
Chapter 3
Sacred Lineages in Central Asia: Translocality and Identity
Chapter 4
Explicating Translocal Organization of Everyday Life: Stories From Rural Uzbekistan
Chapter 5
A Sense of Multiple Belonging: Translocal Relations and Narratives of Change Within a Dungan Community
Part 3
Movements from Below: Economic and Social
Chapter 6
'New History' as a Translocal Field
Chapter 7
Informal Trade and Globalization in the Caucasus and Post-Soviet Eurasia
Chapter 8
The Economics of Translocality - Epistemographic Observations from Fieldwork on Traders In(-Between) Russia, China, and Kyrgyzstan
Part 4
Pious Endeavours: Near and Far
Chapter 9
iPhones, Emotions, Mediations: Tracing Translocality in the Pious Endeavours of Tajik Migrants in the United Arab Emirates
Chapter 10
Translocality and the Folding of Post-Soviet Urban Space in Bishkek: Hijrah from 'Botanika' to 'Botanicheskii Jamaat'
Afterword
On Transitive Concepts and Local Imaginations - Studying Mobilities from a Translocal Perspective

Africa-Europe Research and Innovation Cooperation
This edited volume is concerned with the evolution and achievements of cooperation in research and innovation between Africa and Europe, and points to the need for more diversified funding and finance mechanisms, and for novel models of collaboration to attract new actors and innovative ideas. It reflects on the political, economic, diplomatic and ...

Opening Science
Modern information and communication technologies, together with a cultural upheaval within the research community, have profoundly changed research in nearly every aspect. Ranging from sharing and discussing ideas in social networks for scientists to new collaborative environments and novel publication formats, knowledge creation and dissemination...

The Legacy of Felix Klein
This book provides an overview of Felix Klein's ideas, highlighting developments in university teaching and school mathematics related to Klein's thoughts, stemming from the last century. It discusses the meaning, importance and the legacy of Klein's ideas today and in the future, within an international, global context. Presenting extended version...

Framing in Sustainability Science
This book offers both conceptual and empirical descriptions of how to "frame" sustainability challenges. It defines "framing" in the context of sustainability science as the process of identifying subjects, setting boundaries, and defining problems. The chapters are grouped into two sections: a conceptual section and a case sect...