Insights on Innovation, Patents and Competition 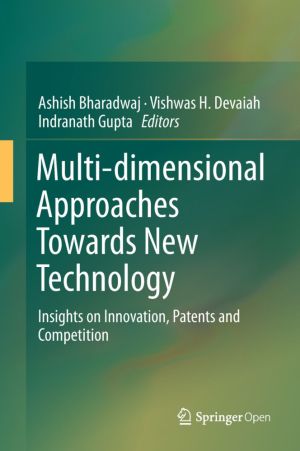 This open access edited book captures the complexities and conflicts arising at the interface of intellectual property rights (IPR) and competition law. To do so, it discusses four specific themes: (a) policies governing functioning of standard setting organizations (SSOs), transparency and incentivising future innovation; (b) issue of royalties for standard essential patents (SEPs) and related disputes; (c) due process principles, procedural fairness and best practices in competition law; and (d) coherence of patent policies and consonance with competition law to support innovation in new technologies.

Many countries have formulated policies and re-oriented their economies to foster technological innovation as it is seen as a major source of economic growth. At the same time, there have been tensions between patent laws and competition laws, despite the fact that both are intended to enhance consumer welfare. In this regard, licensing of SEPs has been debated extensively, although in most instances, innovators and implementers successfully negotiate licensing of SEPs. However, there have been instances where disagreements on royalty base and royalty rates, terms of licensing, bundling of patents in licenses, pooling of licenses have arisen, and this has resulted in a surge of litigation in various jurisdictions and also drawn the attention of competition/anti-trust regulators. Further, a lingering lack of consensus among scholars, industry experts and regulators regarding solutions and techniques that are apposite in these matters across jurisdictions has added to the confusion. This book looks at the processes adopted by the competition/anti-trust regulators to apply the principles of due process and procedural fairness in investigating abuse of dominance cases against innovators.

This open book is licensed under a Creative Commons License (CC BY). You can download Multi-dimensional Approaches Towards New Technology ebook for free in PDF format (4.3 MB).

Innovative Medicine
This book is devoted to innovative medicine, comprising the proceedings of the Uehara Memorial Foundation Symposium 2014. It remains extremely rare for the findings of basic research to be developed into clinical applications, and it takes a long time for the process to be achieved. The task of advancing the development of basic research into clini...

Theoretical and Practical Advances in Computer-based Educational Measurement
This book presents a multitude of different, yet related, innovations in educational measurement and provides insight in their practical possibilities.The book not only addresses several improvements in the quality of educational measurement and innovations in (inter)national large scale assessments, but also several advances in psychometrics and i...

Skills Development for Inclusive and Sustainable Growth in Developing Asia-Pacific
Focusing on the Asia-Pacific region, which in recent years has been the engine of global economic growth , this volume surveys trends and prospects in technical and vocational education and training (TVET) with particular reference to achieving inclusive growth and the greening of economies. Underlying the increasing pressure for new models of TV...

The Definitive Guide to Graph Databases
For the right use case, relational databases are powerful tools. But today's users are asking for more than an RDBMS can handle. More features, more data, more speed and - most importantly - more connections. This ebook introduces you - the RDBMS developer - to a new technology that leverages data connections like never before: the graph...

Finance for Food
This book reflects the current state of discussion about agricultural and rural finance in developing and transition countries. It provides insight into specific themes, such as commodity value chains, farm banking, risk management in agricultural banking, structured finance, crop insurance, mobile banking, and how to increase effectiveness in rura...