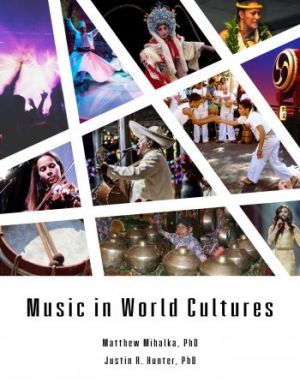 The diversity of musical expressions throughout the world is vast. Music can be found in every corner of the globe in a variety of different contexts.

This open book provides just a small sampling of some of the various musical styles and traditions that might be found, though the skills developed in this course can be applied to any type of music.

Not only does this book explore the music itself, but also the people and conditions that led to its genesis.

This open book is licensed under a Creative Commons License (CC BY-NC). You can download Music in World Cultures ebook for free in PDF format (2.2 MB).

The Piracy Crusade
In the decade and a half since Napster first emerged, forever changing the face of digital culture, the claim that "internet pirates killed the music industry" has become so ubiquitous that it is treated as common knowledge. Piracy is a scourge on legitimate businesses and hard-working artists, we are told, a "cybercrime" simila...

Musical Haptics
This book offers an original interdisciplinary overview of the role of haptic feedback in musical interaction. Divided into two parts, part I examines the tactile aspects of music performance and perception, discussing how they affect user experience and performance in terms of usability, functionality and perceived quality of musical instruments. ...

The Haskell School of Music
This free book explores the fundamentals of computer music and functional programming through the Haskell programming language. Functional programming is typically considered difficult to learn. This introduction in the context of creating music will allow students and professionals with a musical inclination to leverage their experience to help un...

Can Music Make You Sick?
It is often assumed that creative people are prone to psychological instability, and that this explains apparent associations between cultural production and mental health problems. In their detailed study of recording and performing artists in the British music industry, Sally Anne Gross and George Musgrave turn this view on its head. By liste...