The Haskell School of Music

From Signals to Symphonies 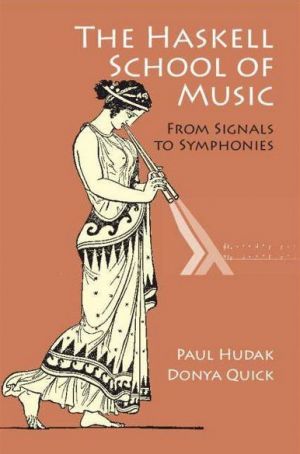 This free book explores the fundamentals of computer music and functional programming through the Haskell programming language. Functional programming is typically considered difficult to learn. This introduction in the context of creating music will allow students and professionals with a musical inclination to leverage their experience to help understand concepts that might be intimidating in more traditional computer science settings.

Conversely, the book opens the door for programmers to interact with music by using a medium that is familiar to them. Readers will learn how to use the Euterpea library for Haskell to represent and create their own music with code, without the need for other music software.

This open book is licensed under a Creative Commons License (CC BY). You can download The Haskell School of Music ebook for free in PDF format (4.1 MB).

The Power of Music
Building on her earlier work, The Power of Music: A Research Synthesis of the Impact of Actively Making Music on the Intellectual, Social and Personal Development of Children and Young People, this volume by Susan Hallam and Evangelos Himonides is an important new resource in the field of music education, practice, and psychology. A well signposted...

The Everyday Life of an Algorithm
This book begins with an algorithm - a set of IF...THEN rules used in the development of a new, ethical, video surveillance architecture for transport hubs. Readers are invited to follow the algorithm over three years, charting its everyday life. Questions of ethics, transparency, accountability and market value must be grasped by the algorithm in ...

Guardians of Public Value
This open book presents case studies of twelve organisations which the public have come to view as institutions. From the BBC to Doctors Without Borders, from the Amsterdam Concertgebouw Orchestra to CERN, this volume examines how some organisations rise to prominence and remain in high public esteem through changing and challenging times. It build...

Can Music Make You Sick?
It is often assumed that creative people are prone to psychological instability, and that this explains apparent associations between cultural production and mental health problems. In their detailed study of recording and performing artists in the British music industry, Sally Anne Gross and George Musgrave turn this view on its head. By liste...

The Piracy Crusade
In the decade and a half since Napster first emerged, forever changing the face of digital culture, the claim that "internet pirates killed the music industry" has become so ubiquitous that it is treated as common knowledge. Piracy is a scourge on legitimate businesses and hard-working artists, we are told, a "cybercrime" simila...