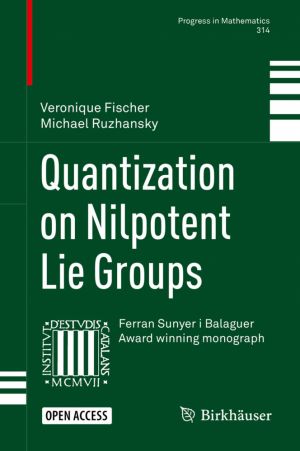 This book presents a consistent development of the Kohn-Nirenberg type global quantization theory in the setting of graded nilpotent Lie groups in terms of their representations. It contains a detailed exposition of related background topics on homogeneous Lie groups, nilpotent Lie groups, and the analysis of Rockland operators on graded Lie groups together with their associated Sobolev spaces. For the specific example of the Heisenberg group the theory is illustrated in detail. In addition, the book features a brief account of the corresponding quantization theory in the setting of compact Lie groups.

The monograph is the winner of the 2014 Ferran Sunyer i Balaguer Prize.

This open book is licensed under a Creative Commons License (CC BY). You can download Quantization on Nilpotent Lie Groups ebook for free in PDF format (5.4 MB).

Agricultural Implications of the Fukushima Nuclear Accident (III)
This book presents the findings from on-site research into radioactive cesium contamination in various agricultural systems affected by the Fukushima Daiichi Nuclear Power Plant accident in March 2011. This third volume in the series reports on studies undertaken at contaminated sites such as farmland, forests, and marine and freshwater environment...

Online Hate Speech in the European Union
and reports on research carried out as part of the European Union co-funded C.O.N.T.A.C.T. project which targeted hate speech and hate crime across a number of EU member states. It showcases the bearing that discourse analytic research can have on our understanding of this phenomenon that is a growing global cause for concern. Although 'ha...

Trade Unions on YouTube
This book investigates how trade unions representing different social classes use YouTube videos for renewal purposes. Information and communication technology has undoubtedly offered new opportunities for social movements, but while research suggests that these new means of communication can be used for trade union revitalization, few studies hav...

Satellite Earth Observations and Their Impact on Society and Policy
The result of a workshop bringing together an international advisory board of experts in science, satellite technologies, industry innovations, and public policy, this book addresses the current and future roles of satellite Earth observations in solving large-scale environmental problems. The book showcases the results of engaging distinct communi...