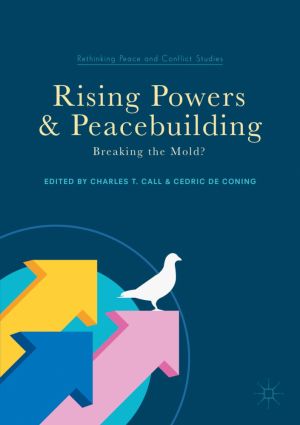 This edited volume examines the policies and practices of rising powers on peacebuilding. It analyzes how and why their approaches differ from those of traditional donors and multilateral institutions. The policies of the rising powers towards peacebuilding may significantly influence how the UN and others undertake peacebuilding in the future. This book is an invaluable resource for practitioners, policy makers, researchers and students who want to understand how peacebuilding is likely to evolve over the next decades.

This important book, recommended for practitioners and scholars alike, demonstrates that the future of peacebuilding will be unlike its past. The discrediting of traditional policy practices matched by the increasing role of rising powers means that peacebuilding approaches are rapidly changing. This collection makes a vital contribution, and poses a set of new and pressing questions. - David Chandler, University of Westminster, author of Peacebuilding: The Twenty Years' Crisis, 1997-2017.

As former Chairman of the Peacebuilding Commission, I have sought to express Brazil's commitment to effectively contribute to end conflict and improve conditions for sustainable development and peace. Two notions have established themselves as essential: multilateralism and diplomacy. The points raised by this book help to illustrate the importance of the United Nations and the primacy of politics and diplomacy in advancing the cause of sustaining peace. - Antonio Patriota, Ambassador to Rome, former Permanent Representative to the United Nations and former Foreign Minister of Brazil.

This open book is licensed under a Creative Commons License (CC BY). You can download Rising Powers and Peacebuilding ebook for free in PDF format (2.8 MB).

Limits to the European Union's Normative Power in a Post-conflict Society
By shedding light on EULEX - the EU mission to Kosovo – this book investigates the EU's peacebuilding activities in that country, in the light of the normative power theory in the post-conflict setting and peacebuilding theory. Ten years after the massive engagement of the EU in the country torn by war, the authors critically assess the effe...

Russia's Turn to the East
This book explores if and how Russian policies towards the Far East region of the country – and East Asia more broadly – have changed since the onset of the Ukraine crisis and Russia's annexation of Crimea. Following the 2014 annexation and the subsequent enactment of a sanctions regime against the country, the Kremlin has emphasized the e...

Wellbeing Economics
Economists have long sought to maximise economic growth, believing this to be their best contribution to improving human welfare. That approach is not sustainable in the face of ongoing issues such as global climate change, environmental damage, rising inequality and enduring poverty. Alternatives must be found. This book addresses that challenge....