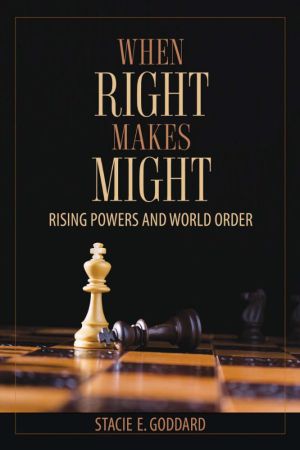 Why do great powers accommodate the rise of some challengers but contain and confront others, even at the risk of war? When Right Makes Might proposes that the ways in which a rising power legitimizes its expansionist aims significantly shapes great power responses. Stacie E. Goddard theorizes that when faced with a new challenger, great powers will attempt to divine the challenger's intentions: does it pose a revolutionary threat to the system or can it be incorporated into the existing international order? Goddard departs from conventional theories of international relations by arguing that great powers come to understand a contender's intentions not only through objective capabilities or costly signals but by observing how a rising power justifies its behavior to its audience. To understand the dynamics of rising powers, then, we must take seriously the role of legitimacy in international relations.

A rising power's ability to expand depends as much on its claims to right as it does on its growing might. As a result, When Right Makes Might poses significant questions for academics and policymakers alike. Underpinning her argument on the oft-ignored significance of public self-presentation, Goddard suggests that academics (and others) should recognize talk's critical role in the formation of grand strategy. Unlike rationalist and realist theories that suggest rhetoric is mere window-dressing for power, When Right Makes Might argues that rhetoric fundamentally shapes the contours of grand strategy. Legitimacy is not marginal to international relations; it is essential to the practice of power politics, and rhetoric is central to that practice.

This open book is licensed under a Creative Commons License (CC BY-NC-ND). You can download When Right Makes Might ebook for free in PDF format (3.9 MB).

Chapter 1
The Great Powers' Dilemma: Uncertainty, Intentions, and Rising Power Politics
Chapter 2
The Politics of Legitimacy: How a Rising Power's Right Makes Might
Chapter 3
America's Ambiguous Ambition: Britain and the Accommodation of the United States, 1817-23
Chapter 4
Prussia's Rule-Bound Revolution: Europe and the Destruction of the Balance of Power, 1863-64
Chapter 5
Germany's Rhetorical Rage: Britain and the Abandonment of Appeasement, 1938-39
Chapter 6
Japan's Folly: The Conquest of Manchuria, 1931-33
Chapter 7
Conclusion: Legitimacy, Power, and Strategy in World Politics

Migration, Gender and Social Justice
This book is the product of a collaborative effort involving partners from Africa, Asia, Europe and Latin America who were funded by the International Development Research Centre Programme on Women and Migration (2006-2011). The International Institute of Social Studies at Erasmus University Rotterdam spearheaded a project intended to distill and r...