Reconceiving Community in a Neoliberal Era 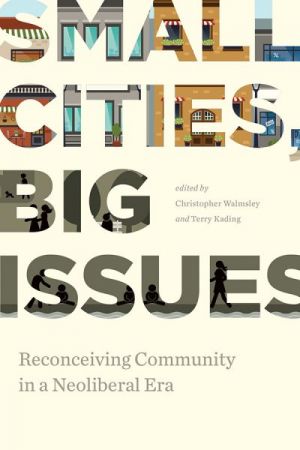 Small Canadian cities confront serious social issues as a result of the neoliberal economic restructuring practiced by both federal and provincial governments since the 1980s. Drastic spending reductions and ongoing restraint in social assistance, income supports, and the provision of affordable housing, combined with the offloading of social responsibilities onto municipalities, has contributed to the generalization of social issues once chiefly associated with Canada's largest urban centres. As the investigations in this volume illustrate, while some communities responded to these issues with inclusionary and progressive actions others were more exclusionary and reactive - revealing forms of discrimination, exclusion, and "othering" in the implementation of practices and policies. Importantly, however their investigations reveal a broad range of responses to the social issues they face. No matter the process and results of the proposed solutions, what the contributors uncovered were distinctive attributes of the small city as it struggles to confront increasingly complex social issues.

If local governments accept a social agenda as part of its responsibilities, the contributors to Small Cities, Big Issues believe that small cities can succeed in reconceiving community based on the ideals of acceptance, accommodation, and inclusion.

This open book is licensed under a Creative Commons License (CC BY-NC-ND). You can download Small Cities, Big Issues ebook for free in PDF format (15.3 MB).

Part I
Displacement, Isolation, and the Other
Chapter 1
Homelessness in Small Cities: The Abdication of Federal Responsibility
Chapter 2
Zoned Out: Regulating Street Sex Work in Kamloops, British Columbia
Chapter 3
Needles in Nanaimo: Exclusionary Versus Inclusionary Approaches to Illicit Drug Users
Chapter 4
Being Queer in the Small City
Chapter 5
"Thrown Out into the Community": The Closure of Tranquille
Chapter 6
Fitting In: Women Parolees in the Small City
Chapter 7
Walking in Two Worlds: Aboriginal Peoples in the Small City
Part II
Building Community
Chapter 8
Social Planning and the Dynamics of Small-City Government
Chapter 9
The Inadequacies of Multiculturalism: Reflections on Immigrant Settlement, Identity Negotiation, and Community in a Small City
Chapter 10
Municipal Approaches to Poverty Reduction in British Columbia: A Comparison of New Westminster and Abbotsford
Chapter 11
Integrated Action and Community Empowerment: Building Relationships of Solidarity in Magog, Québec
Chapter 12
Small City, Large Town? Reflections on Neoliberalism in the United Kingdom

Industry 4.0 for SMEs
This free book explores the concept of Industry 4.0, which presents a considerable challenge for the production and service sectors. While digitization initiatives are usually integrated into the central corporate strategy of larger companies, smaller firms often have problems putting Industry 4.0 paradigms into practice. Small and medium-sized ent...

Balanced Urban Development: Options and Strategies for Liveable Cities
This book provides a unique synthesis of concepts and tools to examine natural resource, socio-economic, legal, policy and institutional issues that are important for managing urban growth into the future. The book will particularly help the reader to understand the current issues and challenges and develop strategies and practices to cope with fut...

The Big Data Agenda
This book highlights that the capacity for gathering, analysing, and utilising vast amounts of digital (user) data raises significant ethical issues. Annika Richterich provides a systematic contemporary overview of the field of critical data studies that reflects on practices of digital data collection and analysis. The book assesses in detail one ...

New Horizons for a Data-Driven Economy
In this book readers will find technological discussions on the existing and emerging technologies across the different stages of the big data value chain. They will learn about legal aspects of big data, the social impact, and about education needs and requirements. And they will discover the business perspective and how big data technology can be...