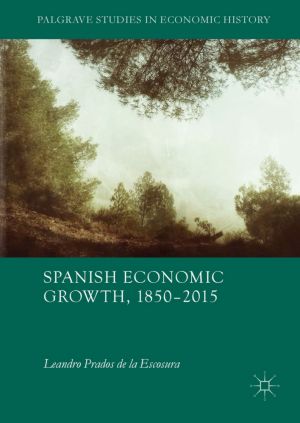 This text offers a comprehensive and nuanced view of the economic development of Spain since 1850. It provides a new set of historical GDP estimates for Spain from the demand and supply sides, and presents a reconstruction of production and expenditure series for the century prior to the introduction of modern national accounts. The author splices available national accounts sets over the period 1958–2015 through interpolation, as an alternative to conventional retropolation. The resulting national accounts series are linked to the historical estimates providing yearly series for GDP and its components since 1850. On the basis of new population estimates, the author derives GDP per head, decomposed into labour productivity and the amount of work per person, and placed into international perspective.

'This book stands among the classics for the Kuznetian paradigm in empirical economics. This is the definitive study of Spain's transition to a modern economy.'

'The definitive account of Spanish economic growth since 1850, based firmly on a magisterial reconstruction of that country's national accounts and an unrivalled knowledge of both Spanish and global economic history of the period.'

This open book is licensed under a Creative Commons License (CC BY). You can download Spanish Economic Growth, 1850–2015 ebook for free in PDF format (5.3 MB).

Re-Inventing Africa's Development
This book analyses the development problems of sub-Sahara Africa (SSA) from the eyes of a Korean diplomat with knowledge of the economic growth Korea has experienced in recent decades. The author argues that Africa's development challenges are not due to a lack of resources but a lack of management, presenting an alternative to the traditional view...

Wellbeing Economics
Economists have long sought to maximise economic growth, believing this to be their best contribution to improving human welfare. That approach is not sustainable in the face of ongoing issues such as global climate change, environmental damage, rising inequality and enduring poverty. Alternatives must be found. This book addresses that challenge....

Internal Migration, Urbanization and Poverty in Asia: Dynamics and Interrelationships
Asia's recent demographic transitions and rural - urban structural transformations are extraordinary and involve complexities that require in-depth study.The chapters within this volume examine those complexities using a range of traditional and nontraditional measures - such as multidimensional poverty, gaps, and polarization - to arrive at the co...