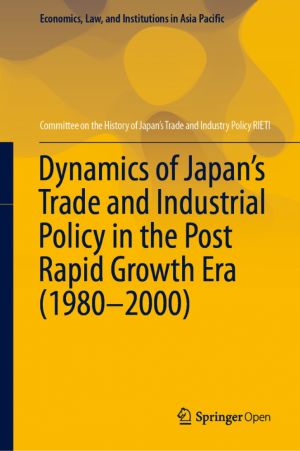 This open book provides an in-depth examination of Japan's policy responses to the economic challenges of the 1980s and '90s. While MITI's earlier role in promoting rapid growth has been addressed in other studies, this volume, based on official records and exhaustive interviews, is the first to examine the aftermath of rapid growth and the evolution of MITI's interpretation of the economy's changing needs. Covering such topics as the oil shocks, trade conflict with the United States, and the rise and collapse of the so-called bubble economy, it presents a detailed analysis and evaluation of how these challenges were interpreted by government officials, the kinds of policies that were enacted, the extent to which policy aims were realized, and lessons for the longer term. This book is recommended especially to officials of countries concerned about the challenges that follow on high economic growth and to readers interested in Japan’s contemporary economic history.

This open book is licensed under a Creative Commons License (CC BY-NC-ND). You can download Dynamics of Japan's Trade and Industrial Policy in the Post Rapid Growth Era (1980–2000) ebook for free in PDF format (5.1 MB).

Shipping and Globalization in the Post-War Era
This free book belongs to the Maritime Business and Economic History strand of the Palgrave Studies in Maritime Economics book series.This volume highlights the contribution of the shipping industry to the transformations in business and society of the postwar era. Shipping was both an example and an engine of globalization and structural change. I...