The Philosophes by Charles Palissot 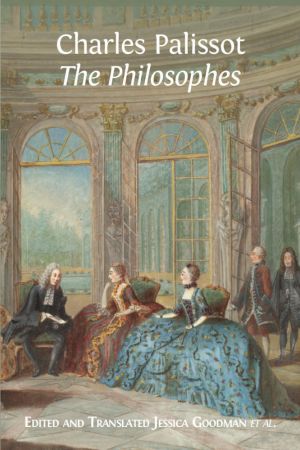 In 1760, the French playwright Charles Palissot de Montenoy wrote Les Philosophes - a scandalous farcical comedy about a group of opportunistic self-styled philosophers. Les Philosophes emerged in the charged historical context of the pamphlet wars surrounding the publication of Diderot and d'Alembert's Encyclopédie, and delivered an oblique but acerbic criticism of the intellectuals of the eighteenth-century Enlightenment, including the likes of Diderot and Rousseau.

This book presents the first high-quality English translation of the play, including critical apparatus. The translation is based on Olivier Ferret's edition, and renders the text into iambic pentameter to preserve the character of the original. Adaptations are further provided of Ferret's introduction and notes.

This masterful and highly accessible translation of Les Philosophes opens up this polemical text to a non-specialist audience. It will be a valuable resource to non-Francophone scholars and students working on the philosophical exchanges of the Enlightenment.

Moreover, this translation - the result of a year-long project undertaken by Jessica Goodman with six of her undergraduate French students - expounds the value of collaboration between scholar and student, and, as such, provides a model for other language tutors embarking on translation projects with their students.

This open book is licensed under a Creative Commons License (CC BY). You can download The Philosophes by Charles Palissot ebook for free in PDF format (23.4 MB).

Collider Physics within the Standard Model
With this graduate-level primer, the principles of the standard model of particle physics receive a particular skillful, personal and enduring exposition by one of the great contributors to the field. In 2013 the late Prof. Altarelli wrote: The discovery of the Higgs boson and the non-observation of new particles or exotic phenomena have made a big...

P5 eHealth: An Agenda for the Health Technologies of the Future
This open access volume focuses on the development of a P5 eHealth, or better, a methodological resource for developing the health technologies of the future, based on patients' personal characteristics and needs as the fundamental guidelines for design. It provides practical guidelines and evidence based examples on how to design, implement, use a...

Gallucci's Commentary on Dürer's 'Four Books on Human Proportion'
In 1591, Giovanni Paolo Gallucci published his Della simmetria dei corpi humani, an Italian translation of Albrecht Dürer's Four Books on Human Proportion. While Dürer's treatise had been translated earlier in the sixteenth-century into French and Latin, it was Gallucci's Italian translation that endured in popularity as the most cited version of...

TensorFlow Roadmap
A deep learning is of great interest these days, the crucial necessity for rapid and optimized implementation of the algorithms and designing architectures is the software environment. TensorFlow is designed to facilitate this goal. The strong advantage of TensorFlow is it flexibility is designing highly modular model which also can be a disadvanta...